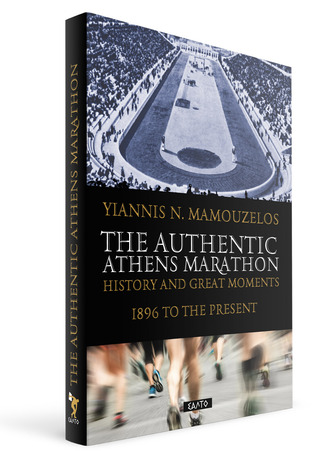 Michel Bréal, father of the modern Olympic Marathon in 1896 could never have conceived how his creation would lead to an international movement with millions of adherents all over the world. The early pioneering competitors could not have imagined that hordes of men and women, with passion and enthusiasm, would be following in their footsteps a century later.
Running the original Marathon, from Marathon to the Panathenaic Stadium is many a runner’s lifelong dream: running the authentic marathon race on the road of history, legend and ideas. The Athens Marathon is uniquely appealing to all runners as the birthplace of the event.

The authentic Athens marathon: history and great moments 1896 to the present is an aesthetically appealing publication (170 pages with extensive photographic and documentary material) written to inform foreign runners (thousands of whom run in Athens every year) by disentangling the legend, misinformation and conjecture from reality.

The book presents the races, the protagonists and the performances, and the geography and history of the areas through which the route passes. In doing so it explains why this marathon has no equal on Earth.

Athletes will read the historical record like a novel but without anything invented from the author’s side. They will then be in a position to appreciate how they are enacting a sequel to the events of another era: repeating the achievement of the ancient messenger in his unique effort not on the Olympic route of 1896, but in an earlier race with momentous historical significance.

The Athens Marathon, which comes colourfully alive in this book, is not just a great annual sporting event, but one of great cultural, social, touristic and economic importance.