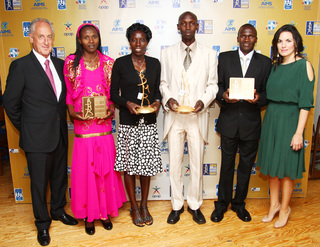 The Gala was staged by AIMS in collaboration with the Hellenic Athletics Federation (SEGAS) and the Athens Classic Marathon and sponsored by the Patron of AIMS and ACM, OPAP S.A., the leading gaming operator in Greece.

The winners were determined in a vote of AIMS members and were revealed for the first time on the night (only the vote-teller was aware of the result before it was announced). Runners-up Stephen Kiprotich and Priscah Jeptoo were also in attendance.

Ingrid Kristiansen was presented with the AIMS Lifetime Achievement Award in recognition of her pioneering role in the development of the Marathon Movement. She was fourth at the (inaugural) Los Angeles Olympic Marathon for women in 1984 and the following year set a world record (or “world best” as they were then called) of 2:21:06 in the London Marathon. She also won the London Marathon in 1984, 1987 and 1988. Her world record lasted 13 years, until Tegla Lorupe beat it by 19 seconds in Rotterdam in 1998.

The purpose of the Gala is to: