Run in the heart of Cambodia 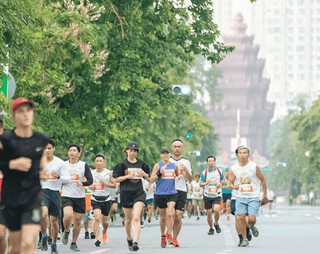 Phnom Penh is the capital and most populous city in Cambodia, located at the junction of the Mekong and Tonle Sap Rivers.

It was a hub for both the Khmer Empire and French colonialists. On its beautiful riverfront promenades, lined with parks, restaurants and bars, you will find the ornate Royal Palace, Silver Pagoda and the National Museum.

The Phnom Penh International Half Marathon has been organised annually since 2011 to celebrate the Royal Birthday of Her Majesty Queen Mother Norodom Monineath Sihanouk. The race starts from in front of the Royal Palace and the course runs down Norodom Boulevard towards the Wat Phnom Hill, the historical birthplace of Phnom Penh city which dates from nearly 600 years ago. Further on runners reach the Japanese Bridge and cross to the other side of the Mekong River. They then turn right onto the road along the beautiful riverbank of Sokha Island. After about 7km runners arrive back at the Japanese bridge and from the 13km point run about 4km into the city along the bank of the Mekong River. The course then crosses Swan bridge to Diamond Island on which there is a modern business centre.

Runners continue for about 3km before crossing Dragon Bridge and turning back for the final kilometre towards the finish line in front of the Royal Palace. More than half of the course runs along the beautiful Mekong riverbank so that runners will be able to enjoy the fresh air from the River and the clean atmosphere of this non-industrial city.

After two years of the Covid pandemic, during which the authorities prohibited all activities that would lead to people gathering together in one place, the Phnom Penh International Half Marathon 2022 was reactivated last June with more than 6000 runners. Runners who participated in the event said they were happy to run with new hopes and lives.

Live events are now being eagerly restarted in many different fields allowing Phnom Penh City to regain the image of what it was like before the time of the pandemic. The Royal Government has opened up opportunities and warmly welcomes all visitors to Cambodia.

In 2023, Phnom Penh will host the 32nd Southeast Asian Games with multiple sports events in Phnom Penh and in some other cities such as Siem Reap and Sihanoukville,

On behalf of the Cambodian Marathon Committee and the National Olympic Committee of Cambodia we would like to invite all runners and supporters around the world to come to the next running event to be held in the centre of the Kingdom of Cambodia – The 11th Phnom Penh International Half Marathon. We are eagerly looking forward to seeing you run in this magnificent event which will be held on Sunday 11 June 2023.

See the latest news from Phnom Penh International Half Marathon