Race around saline water brings out energy that goes beyond fitness

Running at the lowest point on Earth 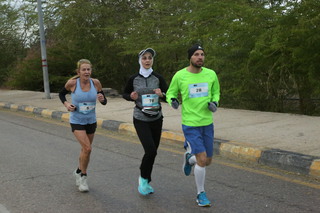 The annual Dead Sea Ultra Marathon took place in March last year and was highly successful with thousands of participants coming from across Jordan and the region. At the lowest point on earth – one of the world’s most renowned locations – Jordan’s Dead Sea brought out an energy from the runners that went beyond physical fitness. They discovered inspiration and emotions that they will remember for a very long time.

Despite the daunting prospect of an ultradistance race people who never think they could ever participate in anything like it rise to the challenge. They go the distance with full force and find a will that pushes them past their limits. “I was never really the competitive type, but there was something about the Dead Sea Ultra Marathon that called me to push myself, and I did,” said Ahmad Muhaisen, the winner of the 50km who recorded 3 hours 18 minutes. “I set a schedule for my training to prepare me for this massive experience. It was more than the prize for me; it was every step and leap along the way, throughout the race. I was celebrating what I am capable of and what my body can actually achieve. I have never experienced a feeling like this before, and that alone was so rewarding.” Mithqal Abbadi finished with 3 hours 43 minutes, and Huthaifa Akkawi took third place in 3 hours 51 minutes.

The women of the race were unstoppable. Safa Takruri finished in 4:40:12 with Chris Peters only 22 seconds behind her followed by Ashwaq Badran just 14 seconds later.

Run Jordan has been hosting the Ultra Marathon for over two decades. At one point in the early years the race started from the Jordanian capital Amman and finished on the shores of our planet’s most saline body of water – the Dead Sea. As of 2016 the race has been taking place solely around the Dead Sea area starting near the Baptism site and ending near the hotels along the waterfront. Over the years the race has collected a large community of supporters who run with their hearts and with a new type of motivation and inner strength. A number of acclaimed personalities have attended the event in support of the initiative and the local and international community of runners.

The Dead Sea Ultra Marathon is organised by Run Jordan, who are strong advocates of sustainability and environmental causes. The race has gained popularity for being a committed supporter of inclusivity and encouraging every type of runner to participate. Ali Sawalmeh, one of the participants who powered through the race in a wheelchair, had a lot to say about his experience: “Even if you can’t do it on foot, even if you think you can’t do it at all, you would be surprised at what your heart can achieve. Don’t you ever let anybody impose limits on your abilities. Run with your heart, and most importantly, have fun.”

The Dead Sea Ultra Marathon goes beyond the goal of crossing the finish line. It is a vehicle through which individual runners cross their own personal boundaries. The race inspires a purpose which each runner discovers within themselves and harnesses as a driving force. Every single runner is a success story on their own, and achieve personal milestones just by showing up, taking charge of their own movement and doing something they may never have done before. That alone is an accomplishment to be proud of. While some runners are rewarded with t-shirts and medals taking part in a physical challenge like this race is a badge of honour for every participant. They are now among the hundreds of runners eagerly anticipating Run Jordan’s next Dead Sea Ultra Marathon to be held on 12 May 2023.