Trio of fast women to compete in Frankfurt 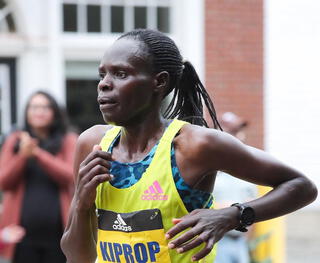 Sally Kaptich heads the line-up for the elite women's field for the Mainova Frankfurt Marathon on October 30.

The Kenyan tops the list of fast athletes with her best of 2:21:06 which she achieved in Berlin three years ago. The race organisers expect around 12,000 participants for the 39th edition of the Mainova Frankfurt Marathon with around 20,000 competitors in total, including events held in conjunction with the main event. This historic race is one of the Elite Label Road Race events, a distinction awarded by World Athletics, the international governing body of the sport. Entries can still be obtained at www.frankfurt-marathon.com

Following the recent announcement of the first wave of competitors for the men’s elite field, the organisers have now announced a number of women contenders for the title. Three among this elite group have personal bests under 2:22. With this news the Mainova Frankfurt Marathon, resuming after an enforced interruption of two years because of the Covid pandemic, has gone close to regaining the quality level of its previous women’s elite fields.

“With three runners who have already run under 2:22, we have a very strong women’s field on the start line,” said the Race Director Jo Schindler. “We’ve noted the interest shown by top runners in the Mainova Frankfurt Marathon. Despite the enforced break because of the pandemic, the race continues to enjoy a strong reputation and runners know that we can offer a course and atmosphere which make setting personal bests a real possibility. Many elite athletes as well as mass runners have broken records or set personal bests in Frankfurt.”

Sally Kaptich comes to Frankfurt as an athlete who achieved third place in Berlin in 2019 where the 36-year-old ran what remains her personal best of 2:21:06. The Kenyan, who also has a seventh place in the 10,000m at the 2013 World Championships to her credit and a bronze medal on the road at the World Half Marathon Championships the following year, ran strongly following her Berlin performance to finish fourth in Tokyo with 2:21:42, six months after Berlin.

Her fellow Kenyan Helah Kiprop has still more laurels to her credit, as well as a best of 2:21:27. She finished second at the World Championship Marathon in Beijing in 2015 and won marathons in Seoul in 2014 and Tokyo in 2016, the latter being where she ran her personal best. This year Kiprop was back in action and winning the Copenhagen Marathon in 2:24:10. Now 37, she knows the Frankfurt course well, having run what was then her fastest marathon of 2:27:14 in 2014 when she finished fifth.

The third runner on the Frankfurt start list with a best of under 2:22 will be Yeshi Chekole. The Ethiopian improved her best to 2:21:17 for third place at the Seville Marathon in February. Also worth noting is her compatriot Meseret Abebayahau. She ran her fastest marathon by over five minutes to finish second in 2:25:18 in Madrid in spring. The improvement was all the more impressive since she had never broken 2:30 previously.