Spectacular and exciting course in the ‘city of running’ 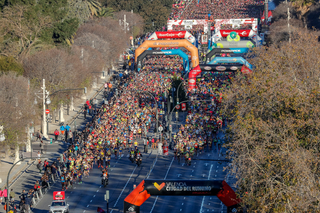 Would you like to race on the fastest course in the world?

Would you like to chase your personal best on long, wide avenues with hardly any bends?

Would you like to do it on a beautiful, sunny winter’s day?

Would you also like to enjoy a weekend with family or friends in a beautiful Mediterranean city?… and after the race celebrate it beside the sea with a delicious paella?

If the answer to these questions is “Yes”, you have an appointment to start the year running in the 10K Valencia Ibercaja on 15 January.

Valencia has been surprising the running world for more than a decade with great race times and the very high organisational level of its events. The 10K Valencia Ibercaja, the best race in Spain at its distance and distinguished with a World Athletics Gold Label, is among them, With its 10K, the Valencia Marathon and Half Marathon and the 2018 World Half Marathon Championships the City sets its standards high in the organisation of road races.

About to celebrate its 15th edition, the race consistently attracts between 10,000–14,000 participants both from Spain and from all over the world. They are all looking forward to beating their personal bests on this extremely fast course. In the last edition runners from 58 nations started the race from the Paseo de la Alameda.

Records are there to be beaten but the world record held by Kenyan Rhonex Kipruto (26:24) and the European record held by Swiss Julien Wanders (27:13) have stoond since January 2020. Besides these several national records have been set in the 10K Valencia over the last few years, including the Spanish women’s record (31:39) held by Trihas Gebre since 2019.

The Valencia 10K perfectly combines long straights, a “very green” course on both sides of the Turia River Garden and a view of the futuristic City of Arts and Sciences. Despite being held in January, race days are always sunny and slightly cool, ideal conditions for running.

The city offers many tourist attractions: the beautiful beach, a centre full of history, the Albufera Lake and the gastronomic offering of the world famous Valencian Paella.

You will enjoy one of the most spectacular and exciting starts you have ever experienced. Entertainment from Spain’s foremost DJ Chimo Bayo will make you fly in the first metres of the race.

The first edition of the 5K Valencia will be held in parallel on 15 January 2023. It Will start 30 minutes before the 10K and is intended to appeal to runners who want to start with an easier distance and for expert runners who are looking for an official time over a distance that is going to be strongly contested in the near future. The organisers want it to be a very fast race, in which personal, national, continental and world records will be sought.

Sunday morning concludes with a fun children’s race, 10Kids, in which children from newborns to teenagers can enjoy a wonderful race for the whole family.

Valencia, known worldwide as the City of Running, offers much more than a world class 10K and awaits you with open arms to start 2023 not only looking for your personal best, but also for an unforgettable experience.