Women on the rise in India’s road running boom 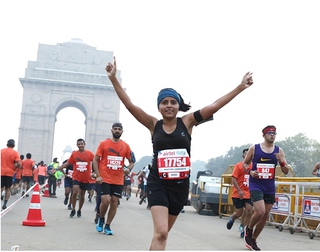 Women in India are increasingly shedding their inhibitions and overcoming social prejudices to embrace road running – the phenomenon coinciding with the distance running revolution in the country triggered by the stupendous success of the inaugural 2004 Mumbai Marathon.

Until the turn of the century, sighting a runner on the road was as rare as a four-leaf clover. Athletes usually trained in stadiums and the few road races held had only a handful of women taking part – all of whom were typically professional athletes.

The Pune Marathon, established in 1983, is widely regarded as India’s first international marathon, but it was only in the aughts that globally-popular road running caught the imagination of the country of 1.35 billion. This was after Procam International, pioneers in the promotion of road running in India, launched the Mumbai Marathon, the Delhi Half Marathon (2005), the TCS World 10K Bengaluru (2008) and the Tata Steel Kolkata 25K (2014).

All four races have attracted some of the biggest names in the sport over the years – putting India on the global road running map.

Road running played a key role in helping more women in India feel empowered and liberated, as witnessed by the significant rise in their participation in distance running events over the years.

Women’s participation more than doubled from the inaugural edition to the last pre-pandemic physical race across Procam’s four events. It is a clear indicator of how more women have embraced the challenge of the sport. A record 11,805 women took part across all race categories at the 2020 Tata Mumbai Marathon.

Road running is now the fastest-growing participation sport in cricket-crazy India, with 1579 timed events on the last count. Without a doubt women have played a significant role in its growth in the country.

From housewives to corporate executives to students, it’s now a common sight to see women running on the roads, with passers-by nodding in encouragement. These are vastly different times from the decades past when women would rarely venture out alone in the wee hours for fear of being ridiculed for running or for safety concerns.

Mumbai resident Kranti Salvi has run marathons both at home and overseas wearing a saree to show that the classical Indian nine-yard drape is comfortably suited for running for women, while Kiran Kanojia, dubbed India’s first female blade runner, has demonstrated that distance running helps develop the steely resolve to take on life’s difficult challenges.

“I lost my leg in a train accident in 2011, but running gave me the power to become what I am today,” said Kiran. “People know me as this (blade runner), and even I didn’t know I could do this. Running helped me develop the never-give-up attitude,” added Kiran, who has completed six half marathons.

Kmoinlang Wahlang from the north-eastern state of Meghalaya, then 71 years of age, stunned the country’s running community by completing the 2019 Tata Mumbai Marathon in a time of 4:33:55. “I had fallen sick and doctors advised I exercise. I found running was the easiest way to maintain sound health,” said Kmoinlang, who has 30 grandchildren.

A combination of factors has led to the rise of women’s participation in distance running: the growing number of races pan-India, the resultant proliferation of running clubs/groups across the country that offer systematic training and safety for women runners as part of the community. They are also driven by the goal of achieving personal bests in blue riband races.

As a result, Procam’s events have become an annual pilgrimage of sorts not only for runners in the respective cities but also for the growing number of running enthusiasts across the country.

It has been widely acknowledged that the Delhi Half Marathon proved to be the catalyst for women in the national capital to take up road running, and India now has over 30 women-only runs. The popular Pinkathon series was established in 2012 to raise awareness for breast cancer. Women are also increasingly qualifying for and taking part in the age-group categories of the Abbott World Marathon Majors.

The TCS World 10K Bengaluru has fielded an all-women pacer team since 2018 that helps both men and women runners in the open category to achieve their personal bests, and women runners have played an active part in fundraising efforts for charities across Procam events over the years.

A generation of India’s women distance runners has also drawn from the experience and exposure of the world-class fields in Procam’s events, with the likes of Lalita Babar, a three-time winner among Indian women at the Tata Mumbai Marathon, also going on to win medals at the 2014 Asian Games and 2015 Asian Championship in the 3000m steeplechase.

Ultrarunning is also growing among women. An Indian women’s team took silver behind Australia in the 2022 IAU 24H Asia and Oceania Championships held in Bengaluru in July.

Sufiya Khan created two Guinness World Records in endurance running after cutting her teeth at the 2017 Delhi Half Marathon. The ultra-runner, in her mid-thirties, set the record for the fastest time by a woman to cover on foot the golden quadrilateral, a network of highways connecting Delhi, Mumbai, Kolkata, and Chennai. She also holds the Guinness record for being the fastest woman to run from Kashmir, up north, to Kanyakumari, the southern tip of the country.

“Running has provided a platform for women to script their own success stories, and it is a sign of a healthy society that more women are taking up sports,” said Vivek Singh, Joint Managing Director, Procam International. “Women are known to possess the strength and fortitude to push the limits, and running is a tremendous avenue to unlock one’s potential,” he added.