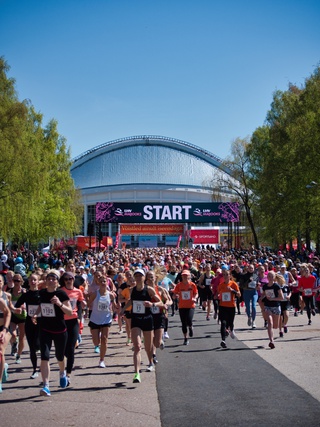 Maijooks (May Run) is the largest women’s running event in Estonia. From small beginnings – a couple of hundred participants in the inaugural race on 29 May 1988 – Maijooks grew steadily. In 2014 a record 16,299 runners started the race. For a small country like Estonia, it is phenomenal: the population is only 1.33 million (0,7 million women). This goes to show that Estonian women are active and love to run and walk.

Due to coronavirus restrictions in 2020 and 2021 Maijooks was held virtually. Although virtual running was a fairly new way of doing things Estonians quickly adopted it. In 2020 5,716 participants took part in the virtual Maijooks. In 2021 there were already 9,138 active runners, walkers and Nordic walkers participating in the second biggest virtual sporting event in Estonia. It was nice to see that women kept moving even during the pandemic.

After a two-year break caused by the coronavirus the comeback this year was not as fast as expected. There were nearly 13,000 participants in total but 43% of them participated virtually.

The location of the race – the Tallinn Song Festival Ground – came along with the race name. It is a place by the sea filled with good emotions and great meaning. There are excellent opportunities for movement on the shores of the Baltic Sea and in the green parks and streets of Maarjamäe.

In the first two years (1988–1989), the race distance was 2km because running was not very popular among women at that time. Running two kilometres was achievable for everyone. For the next three years the race distance was increased to 5km and since 1993 the Maijooks course has been 7km. For six years (2004–2009) men could also run Maijooks on a separate 7km course. In 2021 a 3km girls’ run was added to the Maijooks programme. The 7km and 3km courses can be completed by running, walking or Nordic walking.

Simultaneously with the women’s race there are children’s races offering joy to thousands of kids. A record number of 3,563 participated in 2019.

In 2009 the immensely popular Day Care for Men was opened for the first time. While the women are on the course the men can take care of the children and be active at the same time. In the men’s area you can take part in basketball competitions, shoot penalties, play football, enjoy a hot tub sauna, get a haircut and even buy a flower to give to your loved one at the finish line. But the main activity for men on this day is to cheer and applaud the women.

Maijooks has always been a good start for preparation to the Tallinn Marathon, Estonia’s biggest mass sports event, held on the second weekend of September.

How the race progressed year by year:

By 1990, in just the third edition, participation had increased more than tenfold with 3000 runners at the starting line. Runners were offered food after the race for the first time: Tallinn airport sponsored the event with 3000 airplane meals.

In 1993 the number of participants dropped for the first time. This was due to the tumultuous times and consequent currency changes. Public transportation and petrol prices increased so much that people from further locations did not come. At the same time the women’s race had become so popular that three men were caught at the start line dressed up in traditional women’s folk costumes.

In 1994 it rained for the first time. In previous years participants had always enjoyed clear skies and warm sun after the race while sitting on the grass eating and listening to the concert.

At the eighth Maijooks in 1995 a separate start group for 400 faster runners was introduced. The first hundred of them received a certificate from the International Olympic Committee.

Timing and number bibs were introduced In the 1996 race – using a stopwatch and a pencil. Only about a hundred participants were brave enough to sign up for the timed event.

In 1998 the race was organised under the Olympic flag and was a part of the International Olympic Committee’s event “Sports for Everyone”.

The Maijooks of 2003 was part of the Estonian European movement campaign. The women’s race was concluded with a grand concert titled ‘Yes to the European Union’ In collaboration with Estonian Post, a special Maijooks postcard and stamp were made to commemorate the 16th Maijooks.

In 2005 registration moved online. Dealing with paper forms was becoming a thing of the past.

Electronic timing was introduced in 2006. The After-race concert was headlined by the Estonian Eurovision song contest winner 2001 Dave Benton. He described his Maijooks experience as “..simply fantastic. I just came to perform, but what I found was amazing! Truly fantastic!”