Beat the clock in Barcelona 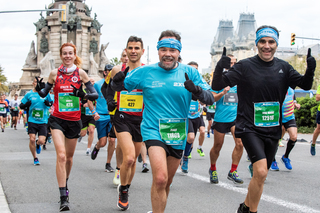 The eDreams Mitja Marató Barcelona is one of the most prestigious half-marathons in the world with one of the fastest courses. The 33rd edition of the race will be held on 19 February 2023.

Participating in the eDreams Mitja Marató Barcelona means feeling emotion and passion. A weekend that brings together sport, culture and cuisine in a unique city full of monuments, art and culture where residents line the streets to cheer on the runners.

At the start line thousands of people from different cultures come together with a multitude of sporting targets but all united, after weeks of training, by their commitment to cross the finish line.

The Barcelona half marathon is for everyone. It’s for the elite athletes who can beat world records, like Florence Kiplagat (Kenya) in 2014 and 2015, when she stopped the clock at 1:05:09; or Haftu Teklu (Ethiopia), who beat the course record in the last edition with a time of 59:06. But above all it is a race for the thousands of runners who come from all over the world – and who are the real stars of the event. The experience lived through by over 13,000 participants last year was reflected in the joy on their faces as they crossed the finish line.

The course takes participants down the most iconic streets in Barcelona, passing such places as the Christopher Columbus monument, the Fòrum, the Arc de Triomf, the Diagonal and the Gran Via. The route through the city is fast. It is also a very attractive circuit that passes through several areas with tourist sights, which always leaves nice memories in the minds of the runners.

The start is very fast, continuing into the Gran Via and from km12 there is a descent for one kilometre to Port Fòrum. The race then goes along the Diagonal for a 3km out-back section. Participants then run alongside the Mediterranean Sea as far as km19 (the Olympic Village) before the final 2km run-in to the finish.

The event offers top-level services and comprehensive, almost personalised care. There are refreshment points on both sides of the route, a lot of entertainment activities, a runner’s T-shirt and bag for every participant and a medal for the finishers.

Since its first edition the race has consolidated itself, increasing the number of entrants every year. In 2019 organisers had to put a cap on registrations when the field reached 23,000 participants.

The race has been awarded the Elite Label by World Athletics and also won a prize as the best half-marathon in Spain.

A priority of the eDreams Mitja Marató Barcelona has been to minimise the impact of the race on the environment. Specific measures to achieve this include the use of electric vehicles, zero paper in runners’ bags, a calculation of the carbon footprint and the separation of waste products for recycling.

We would like to share Barcelona with you, the runners, as you are the authentic stars of the event. We will be waiting for you with open arms on 19 February next year.