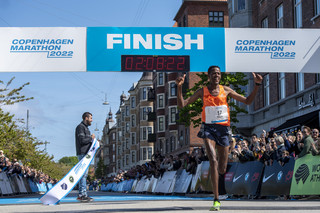 In the men’s race, Berhane Tsegay of Eritrea crossed the finish line in 2:08:23, cutting one and a half minutes off the previous record from 2019, while Helah Jelegat Kiprop of Kenya took an even larger slice – 5:19 minutes, to be exact – off the women’s record, winning in 2:24:10. Both times are also new Danish All-Comers record.

Sunny conditions with 15 degrees in the Danish capital proved to be the perfect frame for a fast race. A leading group of ten men, with Ethiopian pacemaker Muluneh Bekele in front, passed the half marathon mark in promising 63:26 minutes. At 30 km, that group had diminished to six runners, before two Kenyans, Samuel Kiplimo and Daniel Kipchuma, accompanied by the two Eritrean athletes, Berhane Tsegay and Henok Tesfaye, broke free of the rest. With two kilometers to go, Tsegay showed strength easing to the finish line with his compatriot Tesfaye 16 seconds behind.

Despite improving his personal best by four minutes, Tsegay didn’t seem surprised by his victory.

“I knew I was in a good shape, so I am not surprised. It was a fine race and a good course,” he said.

Daniel Kipchumba came in third in his marathon debut. With a time of 2:08,55 he as well was below the race record.

The silver medalist from the World Championships in Beijing 2015, Helah Jelegat Kiprop, showed that she is back in business after giving birth to a son two years ago.

“I am very happy to win the race and, of course, to set a new race record. It is good to be back after the birth and then the pandemic. But right now, I don’t know what my next goal will be,” the 37-year-old Kenyan said.

During the whole race, Muluhabt Tsega (ETH) looked like a strong contender to the victory but eventually had to settle with the second place, lowering her personal best from 2018 with more than a minute.

“After we were forced to cancel the race in 2020 and 2021, Copenhagen Marathon today returned stronger than ever. We had a marvelous race day with thousands of spectators along the course, and it was all crowned by lightning-fast race records for both men and women. There should be no doubt that Copenhagen is the city for those who want a running experience beyond the usual,” race director Dorte Vibjerg puts it.