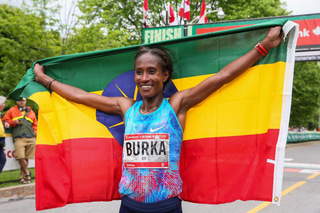 Gelete Burka is smiling warmly as she moves about her house in Addis Ababa, the Ethiopian capital city. She’s looking into her mobile phone during a WhatsApp video call in which she confirmed her return to the newly renamed Tartan Ottawa International Marathon, Sunday, May 29th.

The World Athletic Gold-label event will be held in person again after a two-year hiatus due to the pandemic.

On her previous visit in 2018, Gelete – Ethiopians prefer to use their first names – broke the Canadian All Comers’ record (the fastest time recorded on Canadian soil) with a stunning 2 hours 22 minutes 17 seconds despite conditions that weren’t exactly agreeable.

“Of course that time everything was hard,” she remembers still smiling. “The weather! I had been training here in Ethiopia and it was so very hot and also the (strong) wind and I also had stomach cramps. Anyway, God is good and, for me that day, helped me for that victory. I was so very happy.”

The margin of victory despite stomach cramps, the wind and the cooler temperatures (it was a cool 13 degrees Celsius at 7am that day) was roughly four minutes such was the effort she expended.

“Ottawa is a good memory for me,” she continues. “When I was training I had a bit of a leg problem with an injury to my calf and I came to Ottawa with that injury. It was not easy. That was why I smiled when I came to the finish.”

Although she rarely leaves the hotel at a marathon – preferring to totally focus on the race at hand – after her Ottawa victory she attended an Ethiopian church with Ottawa friends to give thanks.

In Addis she is both an usher and a member of the forty-member choir at The Glorious Life Church. With two Sunday services, plus another on Tuesday nights, her devotion to the church is exemplary. No wonder she has little time, outside of training and travelling, for herself. When she does have free time she might have tea or coffee with friends.

As she speaks, Gelete shifts position for better light and the contents of her cabinet come into focus.

There is her 1500m gold medal from the 2008 World Indoor Championships, the 2006 World Cross Country gold and the 10,000m silver medal she earned at the 2015 World Championships in Beijing. Without a second thought she suddenly beckons two children to join her in the picture. They are her young niece and nephew, Deborah and Muse, and she asks them to say hello into her phone.

Family is ever so important. These are her youngest sister’s kids. The financial rewards of being a world class runner – she took CAD 30,000 (USD 24,120) prize money from Ottawa for instance – over two decades has allowed her to take care of both immediate family who live with her, while also contributing to the welfare of children in her home village of Kofele in south central Ethiopia.

Gelete has represented Ethiopia in six successive world outdoor championships and three Olympics. In Rio six years ago, she finished 5th in the 10,000m earning her personal best of 30:26.66. Had it not been for a slight on the part of the Ethiopian federation a year later, she might never have turned to the marathon.

“After that I stopped track and that is the point when I went to the marathon. So, I trained for the Dubai Marathon where I ran 2:20:45.”

A year later she won the 2019 Paris Marathon in 2:22:47, then finished 3rd in Chicago, one of the ‘World Majors,’ in 2:20:55. The latter result illustrates the importance of pacemakers to marathoners.

“In Paris we had a very nice pacer and also in Chicago, you remember the world record was broken,” she remembers. “The pacemakers went with the Kenyan lady (Brigid Kosgei set the world record of 2:14:04) and after 2km I was all by myself for 40km. Maybe when someone is pushing me I will run under 2:19. I need a good pacemaker. Yes I hope it is arranged (in Ottawa). I want to go under 1:10 the first half.”

Gelete is coached by Getamesay Molla and belongs to a group of strong Ethiopian runners who train together on the dusty roads of Sendafa, Sululta and Entoto outside Addis. Traffic inside the capital makes training there near impossible. Preparations, she says, are going well for Ottawa.

“My training now is very nice,” she allows. “I am happy with my training and I have another two months to get in good shape.”

Racing regularly again following the coronavirus pandemic is a welcome relief for her. Now that she is 36 years old, an age that used to indicate the twilight years of an athletics career, she doesn’t know how much longer she will continue training and racing. The Paris Olympics are two years hence.

“I don’t know about that (Paris) I don’t have an idea about this,” she says carefully.
“Even if I run a good time it is not easy with my federation (to win selection). You saw like Kenenisa (Bekele who was controversially left off the Ethiopian Olympic team) last time in Tokyo. I will see what my time is. Sometimes you have the time, but I don’t know why they do this.”

Politics notwithstanding Gelete has several more world-class performances in those legs. Reducing her personal best and getting under the 2 hours 20 minutes barrier remains a target. She would like for that to happen on the streets of Ottawa.