Kosgei, Kipchoge come close to their own records 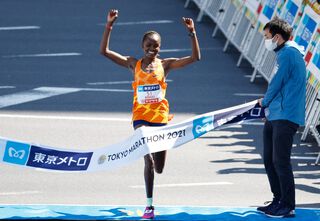 Both won by large margins and showed complete control in their races. Kipchoge’s performance was the fourth-fastest ever (with three of these marks being his own) and Kosgei’s was third fastest behind her world record of 2:14:04 from Chicago in 2019 and Paula Radcliffe’s 2:15:25 from London in 2003.

Ethiopia’s Mosinet Geremew (personal best of 2:02:57 from 2019) dropped back at 23km and dropped out soon after. When pacemaking finished at 27km the race was down to three. Tamirat Tola slipped back and Kipchoge then had only Amos Kipruto for company as they went through 35km in 1:41:30 (2:02:38 pace).

Kipchoge began to move away in the 37th kilometre. The final section was into a headwind but Kipchoge maintained his pace for an emphatic victory.

The women’s race also started fast, with the first 5km downhill, passing through 10km in 32:14 (2:16 pace). The course record was set last year by Lornah Salpeter with 2:17:45. Kosgei was in a group with Ethiopians Gotytom Gebreslase, Ashete Bekere and Hiwot Gebrekidan plus Kenya’s Angela Tanui. A chase group included Japan’s Hitomi Niiya, who had won the first Tokyo Marathon back in 2007.

The same leaders reached halfway in 1:08:06 (2:16:12) with Kosgei tracked by Gebreslase. By 35km the two had eventually broken away, and Kosgei moved into the lead at 37km, pushing on for an unchallenged win. Five runners ran times under 2:20.