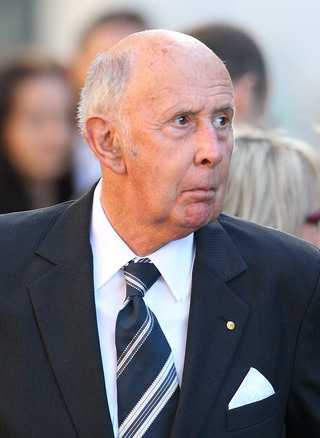 John Landy, the second man in history to break four minutes for the mile, died on 24 February at the age of 91.

Six weeks after Roger Bannister had run 3:59.4, to become the first man to run the mile in under four minutes, John Landy improved Bannister’s world record to 3:58.0. For the previous two years both men had been concentrating on running a sub-four-minute mile after disappointing performances at the 1952 Olympic Games in Helsinki.

Landy leapt ahead to lead the chase, improving his personal best by a full eight seconds to 4:02.1. In Helsinki he had been influenced by the example of Emil Zatopek who had won all the long-distance events in with an impressively hard training regime. Landy’s breakthrough brought the prospect of a sub-four-minute mile centre stage, with Bannister and the American runner Wes Santee his main rivals.

While Landy and Santee concentrated single-mindedly on upping their training Bannister sought help from renowned coach Franz Stampfl and from his training partners Chris Chataway and Chris Brasher as pacemakers. An illegally-paced effort in 1953 yielded a time of 4:02.0 but by the start of the 1954 season, as Landy looked for races to sharpen his form, Bannister was ready to launch his effort. The pacing was crucial to Bannister’s successful attempt – and this time within the rules.

With Landy slicing 1.4 seconds from Bannister’s barrier-breaking record the clash between the pair at the 1954 Empire Games in Vancouver was highly anticipated. Bannister had the fearsome finish and Landy was a committed front-runner. True to form, Landy’s relentless effort opened up a gap by halfway but Bannister closed down on him before outsprinting him in the home straight to record his fastest-ever time of 3:58.8.

Landy was less than a second behind and ran under four minutes for the second time. He had sustained a foot wound from broken glass but insisted it did not affect his performance.

After a break from running in 1955 Landy returned early in 1956 to record two more sub-four-minute miles as well as set national records in the 880 yards and three miles.

In May Landy was approached by the Government of Victoria to make a US tour in order to counter negative impressions of the Melbourne Olympics. Landy’s schedule was punishing yet he twice ran sub-four-minute miles at a time when only five men had beaten the mark. But he also sustained a tendon injury which limited his training on return to Australia

He was the face of the 1956 Games in Melbourne but was struggling to regain fitness and confidence. After lagging behind the leaders in the final of the 1500m he came alive on the last lap but ran out of ground, finishing with the bronze medal.

In later life Landy’s sense of civic duty led him into becoming Governor of Victoria from 2001–2006. In the Queen’s Baton Relay at the Melbourne 2006 Commonwealth Games he received the baton on the final stage and delivered it to Queen Elizabeth II.

“He maintained his huge enthusiasm for athletics right to the end and was one of its great ambassadors,” said World Athletics President Sebastian Coe. “Our sport owes him a huge debt.”