Run at the top of the world – an unforgettable Arctic experience. 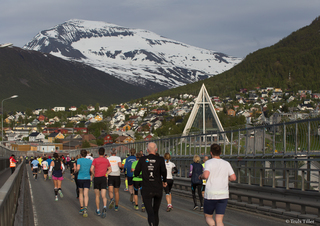 The very first Midnight Sun Marathon took place in 1990. It has since found a place on the bucket list of runners all over the world.

The race has often been named as one of the best marathons in the world. Since it was started thousands and thousands of runners from far-flung places have enjoyed the midnight sun and the scenic course which passes through and around Tromsø’s vibrant city centre. An enthusiastic crowd cheers runners on – that crowd on occasion has even included the King and Queen of Norway. Although you run during late evening and at night there is always plenty of support. There is also the pleasure of running through pristine landscapes and raw Arctic nature under the midnight sun.

The race starts in the evening and finishes around midnight in the city centre. Apart from the marathon you can choose to do the half marathon, the 10km, the mini-marathon (4.2km) or the kids’ marathon (800m). There is a distance for everyone

In 2021, 2310 runners participated in the race – a number that was restricted by the global pandemic. At its peak in 2017 over 6000 runners from more than 70 different countries took part. In that same year the event passed the milestone of 100,000 runners having completed the event since it began in 1990. Hardly any other marathon in the world has such a high percentage of foreign runners.

Tromsø is the Arctic capital, located at 69 degrees north, about 350km above the Arctic Circle. Most of the city is situated on an island surrounded by the sea and majestic mountains. It is the largest urban area in Northern Norway, and the third largest north of the Arctic Circle anywhere in the world.

The Arctic light and nature in Northern Norway are filled with strong contrasts that provide intense experiences. For two months during summer the sun never goes below the horizon – and we enjoy the midnight sun.

The usual way to travel to Tromsø is by air. Most international flights go via Oslo but it is also possible to travel by boat or bus. A large number of cruise ships call in at Tromsø every year. If you travel by sea, the Hurtigruten coastal route is very popular.

The Arctic is full of contrasts and, in addition to the Midnight Sun Marathon in June, you can try the ‘polar opposite’ experience of taking part in the Polar Night Marathon, a winter race held in early January. Tromsø is a perfect place to experience the Polar Night and the Northern Lights in the wintertime. During the polar night the sun doesn’t rise for two months but winter in Tromsø is not especially cold. The average temperature in January is –4ºC.

We cannot guarantee the Northern Lights (to see them there must be clear skies), but Tromsø is one the best places to get to see them. And why not combine it with some dog sledding, or go whale watching or have a sauna? There are so many possibilities! So whether you choose the Midnight Sun Marathon or the Polar Night Marathon – or both – you will have the experience of a lifetime. Welcome!