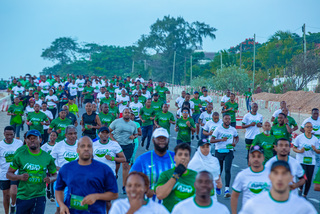 CRDB Bank Marathon is a charity-led race organised by one of the leading banks in Tanzania.

It started in 2020 and has since been staged successfully for two years in a row. In the first year there were 5000 participants. In 2021 the race was certified making it the second internationally-recognised race in the country. It takes place in Dar es Salaam, the national capital situated on the coast of the Indian Ocean. Runners experience beautiful scenery, flat terrain and an ocean breeze that makes the running even more enjoyable. The race is the premier event for both professional as well as social runners within the country and across the region.

The CRDB Bank Marathon prides itself on its dedication to the cause of raising funds for various social needs in the country. With a tagline that translates as “The Race That Spreads a Smile”, we have been able to raise over USD 200,000 for supporting underprivileged children’s cardiac surgeries at the country’s only public Cardiac Institute. All funds raised go towards funding this charitable cause and many others, providing a lasting social impact.

The 2021 CRDB Bank Marathon was registered with AIMS and had a 50% increase in participants while doubling the funds raised for charitable causes.

The CRDB Bank Marathon is currently a sell-out bucket list event for runners with around 6500 participants across all distances. The race has a growing international appeal and attracts runners with distances ranging from the marathon, through the half marathon and 10km race, to the popular 5km family fun run. We also offer a 65km cycling race through the suburbs of Dar es Salaam.

The course takes runners through the vast Dar es Salaam peninsula – with breathtaking views. The routes pass both through areas of public beaches and past fancy touristic beach hotels.

During the race (on the second Sunday of August each year) runners will experience stunning sunrises along the course. The race incorporates on-route entertainment portraying Tanzanian cultures and dances ranging from the famous Nilotic Maasai to the coastal Swahili.

The race’s popularity arises from being not only a sporting spectacle but also a social event which brings together families, friends, and business partners who get to hang out and enjoy the event after the race. Food, drinks and entertainment are shared as part of our rich Tanzanian way of celebration. A Tanzanian event with a soul: an African soul with a positive outlook towards athletes and the entire community by providing a wide range of social and sporting experiences.

The race has been proud to attract leaders of the country to take part. In 2020 the race was graced by the then Vice President and current President of The United Republic of Tanzania, Her Excellency President Samia Suluhu Hassan. The presence of a former President, current Prime Minister, and many other political and corporate leaders has made the race an exceptional event.