Putting the concept into ‘concept races’ 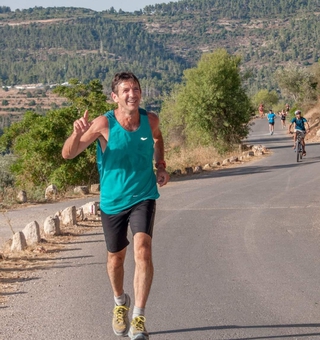 The two most challenging races in Israel are the country’s only Vertical Race, to the top of Mount Hermon, and the only Beaujolais Half Marathon held outside France – which ends at sunrise with a huge post-race rave at the foot of Masada, a UNESCO National Heritage Site. The man behind these events is Ofer Padan (61) who is always on the lookout for the next amazing running event to produce.

The running world is full of races which begin at the start line and end at the finish. You come, you run, you get a medal, you go home. But then there are those special running events which quicken your pulse months in advance: races which are a lot more than just clocking up kilometres.

Marathon Israel, and owner-entrepreneur Ofer Padan, specialise in producing these spectaculars. Ofer is a passionate and inventive entrepreneur and race producer who lives and breathes running. For over 15 years he has constantly been dreaming up new concepts, tweaking and re-planning routes, and adding new races to an ever-growing list of what he calls “concept events”.

“When I proposed holding a full marathon in Tel Aviv in 2009 as part of the city’s centenary celebrations, people looked at me as if I was crazy,” says Padan. “Until then the city hosted infrequent 10km and half marathon races. I believed that a major metropolis such as Tel Aviv deserves a full marathon course. Nearly 1000 runners finished that year, and since then it has grown to become the largest running event in Israel.”

Padan developed some of Israel’s most iconic races. Two years after the Tel Aviv triumph he partnered with the Municipality of Jerusalem to produce the Jerusalem Marathon. It has since become one of the most colourful and challenging road-races in the country, bringing together tens of thousands of runners from Israel and abroad.

Ofer Padan set up Marathon Israel in 2007 as a creative production company focusing on providing runners with events that combine physical challenge, camaraderie and a fun-filled atmosphere. Some are designed as weekend-long happenings, with lectures and live music on the night before the race, to workshops, yoga and “after parties” following the race.

When Ofer talks about running he gets animated. “I’m not a race director,” he says, “I’m an entrepreneur. I dream up new concepts for the benefit of runners. When people come to one of our events, I want to give them more value than they expected, a total experience and not just a race.” Most Israeli runners know him personally. He goes over each course before the race, is involved in all details, greets runners on the start line and cheers them across the finish line. “There are lots of partners in our success, and Marathon Israel would not be where it is today without the support of many good people,” he says.

Marathon Israel now boasts 10 concept events – from the country’s highest peak in the north with the Hermon Vertical Challenge, to the tough Eilat Desert Marathon in the south which begins and ends on the shore of the Red Sea. Each event is unique, such as the “Crane Race” in the Hula Valley which runs alongside millions of birds migrating from Europe to Africa. Or the Bible Marathon which follows the route of one of the world’s first ‘marathon’ runners.

Each event offers various courses, to make them attractive to wider audiences: from full and half marathons through 10km and 5km routes to 1–3km fun-runs for families and younger runners.

Ofer is constantly planning new concept events to broaden Marathon Israel’s portfolio. One such, which has become an Israeli sensation, is the Beaujolais Half Marathon – a concept which was adopted from France in cooperation with the French Beaujolais Marathon. In Israel runners are encouraged to run in fancy dress. The course passes through vineyards and boutique wineries in the central region which offer excellent wines and an ongoing party atmosphere at the numerous refreshment stations along the way.

Marathon Israel’s events attract hundreds of runners from Europe, and the company cooperates with races abroad to promote them as well. “Thanks to Israel’s moderate weather, our races are on the calendars of many international runners, mainly in the winter months where European runners can enjoy the exotic scenery while their home countries are cold and rainy,” says Padan. “There are runners who come back year after year. It’s a short flight, the weather is great, the food is amazing and the people are warm and inviting. It’s a win-win situation.”

Things were running smoothly – new races and concepts were in the works – and then everything came to a total standstill. “Covid-19 nearly killed us”, says Ofer. “We had lots of races planned but regulations changed daily and lockdowns and quarantines kept people at home. We were forced to cut back and even let employees go. At one point we closed our headquarters and moved our offices to my house. I did everything I could to keep Marathon Israel alive, and thank God we pulled through. During 2021 races were allowed again and we picked up where we left off and did what we know best – creating great running events for runners.”

One of the initiatives which helped to keep the company afloat even through the pandemic was a new concept of exclusive Runners’ Villages. Marathon Israel partnered with selected guesthouses and campsites across the country – many of them at kibbutzim – and turned them into unique locations which serve as a base-camp for runners, running groups and even bike riders who wish to train in a different area. The Runners’ Villages are outfitted with comfortable accommodations and all the facilities to offer guests a complete package – meals, multimedia equipment, a place for recreational activities and most important – easy access to some of the country’s most exciting trails.

“Our Runners’ Village concept showed that being outdoors in the fresh air is something we all need and crave, and Covid won’t stop us,” says Padan. “Since most Israelis couldn’t fly anywhere for months, and both local and international races were cancelled, the Runners’ Villages became a unique alternative. Most weekends they were fully booked with limited groups, and people loved the idea. We now have eight locations across Israel.”

Throughout the years Marathon Israel has kept close ties with AIMS. The exchange of information, knowledge and expertise has proven invaluable. “I believe that runners around the world all want the same things”, Ofer says. “Just as music and food connect people, running does too. It’s a simple global language and it removes barriers. Just a few years ago Israel signed the Abraham Peace Accords with the UAE and we immediately initiated cooperation with race organisers in Dubai. We were forced to cancel our delegation to the Dubai Half Marathon last year, but we’re looking forward to proudly stand on the start line with hundreds of Israeli runners in 2022.”

Plans for Marathon Israel’s running events in 2022 are in full swing. “We have some surprises in the works, but we’re mainly looking forward to getting over this pandemic and back to normal. Besides keeping our business running and staying healthy, I think we all miss connecting with people and strengthening values and friendship through sporting challenges. These are the things I look forward to.”