Alongside the beach and through the heart of the city 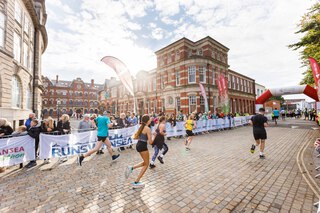 In June Wales will host its biggest summer half marathon since 2019.

Organisers anticipate a race-hungry field of runners returning to take part in the JCP Swansea Half Marathon. Since the inaugural event in 2014 this coastal half marathon has attracted runners from across the globe with competitive elite line-ups on what has become renowned as one of the flattest and most scenic courses in the UK.

With a rising reputation as a must-do UK race, the event has won several accolades over the years including Best Half Marathon at the UK Running Awards. On Sunday 12 June thousands of runners will gather at the start line in Swansea, near to the scenic Gower Peninsular.

Starting at the beautiful historic Brangwyn Hall the course runs through the heart of the city and past major landmarks such as Wales’ oldest museum and the National Waterfront Museum. Runners will pass the newly-built Swansea Arena, the world-renowned St Helens rugby stadium, the Swansea Jack memorial and the Cenotaph as the course heads towards the picturesque coastal village of Mumbles.

Those taking part will delight at the splendour of the famous Swansea Bay. The Bay has one of the highest tidal ranges anywhere in the world and offers views that stretch for miles out to the horizon. In the distance runners will be able to see Mumbles Head lighthouse and pier, home to the RNLI lifeboat rescue.

The sleepy village of Mumbles comes alive with support for the runners as they head down to Knab Rock and back to the city along the promenade. This stretch of coastline provides an incredible backdrop towards the finish. On return to the city participants will delight at the sight of Swansea’s tallest building dominating the landscape as they enter the Maritime Quarter and cross the Trafalgar Bridge. Upon entering the city centre runners will see that, although there are now many modern buildings, during the industrial revolution this was once one of the busiest ports in the World. Just before runners reach the finishing straight they cross over Swansea’s striking Sail Bridge with stunning views of the Maritime Quarter.

Runners finish outside Swansea’s oldest museum and several listed buildings including the former Swansea Harbour Trust building, now a boutique hotel that perfectly complements the city-to-sea running experience. This vibrant city has all the amenities you could hope for and is well-placed to welcome international visitors with dining and entertainment centres close to the finish.

Notable finishers from previous editions include Team GB’s Dewi Griffiths and Tracy Barlow. Matthew Clowes and Tracy Barlow are current course record holders with 1:04.43 and 1:13.50 respectively. The wheelchair record is held by Richie Powell in a time of 1:01.27.

The ‘Swansea Half’ is the single biggest fundraising event in the city, supporting over 25 charities and good causes. With over £2m raised since the inaugural race the event contributes to the local community both socially and economically.

Aside from the magnificent views, the flat and fast course is a great reason for runners to take part and try to beat their personal best. The city-to-sea route is perfect for runners of all abilities, whether you’re a first-time half marathoner, an experienced club runner, or simply running for fun.