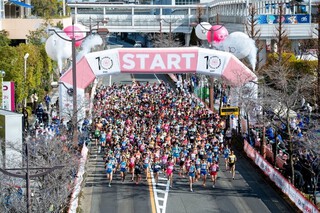 The Nagoya Women’s Marathon announced today that it will host a number of the world’s best women runners at its 11th edition race scheduled for Sunday, March 13, 2022.

The race will be the first time in history that the sport of world marathon running will offer its highest first prize for women rather than men.

The entry of foreign-based athletes into Japan is currently under final adjustment.

The race will also feature strong domestic athletes in the entries including Yuka Ando, the Japanese representative for the women’s 10,000m in the Tokyo 2020 Olympics and the women’s marathon in the 2017 World Athletics Championships London and the two-time second-place finisher of the Nagoya Women’s Marathon 2020 and 2017, and Mirai Waku, the Japanese representative for the 2016 World Half Marathon Championships Cardiff.

The 2022 entrants will be competing for the largest first prize in the world for marathon running: 250,000 USD. This will be a historic year not only for the women’s marathon but also for the marathon sport as a whole, by way of presenting the highest prize to a female athlete. It shows how far the sport has progressed since the 1960s when women were banned from taking part in many marathons around the world and the year 1984 when the women’s marathon finally became an Olympic sport in the Summer Games in Los Angeles.

The Race Organiser comments: “We are delighted to welcome such outstanding women athletes in this year’s race. While it will be exciting to see how the competition unfolds, we are committed to supporting all women runners and their challenges. Japan has been hit by the spread of the Omicron variant of coronavirus, but our first priority is always the safety and security of our runners, volunteers, and everyone concerned in the event. Taking advantage of the experience of having safely staged in-person races under the pandemic in the past two years, we are preparing to hold this year’s race by closely working with the local authorities and medical experts and taking all possible measures against infection.”