‘Looking down, I can see the entire desert that I was running through’

Run back in time 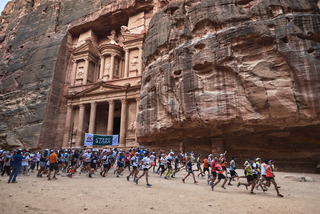 From my vantage point on the mountain ridge I see a never-ending landscape of soft sandstone mountains popping up from the desert sand. In the far distance, Israel is visible through the heat haze of the Wadi Araba desert. Only five kilometres to the finish line. I’m longing to rest but I don’t want this incredible scenery to end.

Earlier that morning, at 05.15, I had met 200 fellow runners from 25 different countries at the Petra Visitors Centre. It was dark, the crescent moon just visible on the horizon, and it felt a little chilly despite 22ºC showing on the hotel thermometer. A race official led us inside the UNESCO Heritage Site of Petra – a 2km walk including 1.2km through the narrow gorge called the Siq. As we exited the Siq I was amazed to see the landmark of Petra – the Treasury – reveal itself. The Start line banner was right in front of it – what a place to start a race.

As the race got underway my eyes fixated on the amazing surroundings: a settlement of caves to my left; facades more than 50m high to my right; the Amphitheatre carved right into the mountain; and the colonnaded street. These are just some of the attractions diverting my attention from my footing.

After six kilometres, and a few tough hills, the route weaves into the desert. Although this part is flatter it does not allow faster running. Soft sand is replaced by gravel, which is replaced by loose rock, only to be replaced again with soft sand. This was no easy course but I was loving every single step of it. The views in the desert are incredible – the rising sun illuminates a kaleidoscope of red, brown and golden colours over the ever-changing mountains, giving the rock surface all sorts of fabulous shapes. At times I wondered whether I was running in the Jordanian desert or on Mars.

The course was well-marked so I was never in doubt about the route. Instead I could really enjoy the scenery: the occasional Bedouin tent and passing herds of goats. Fourteen well-stocked water stations kept runners hydrated in the desert heat and each station was managed by super-friendly staff who asked how I was doing and cheered me on.

I eventually found myself passing the 31km mark and with about a quarter of the course left I felt fine. But then I looked up… way up. I spotted a little blue umbrella on the mountainside – the next water station – and between me and that refreshing sight lay a twisting black paved road that became thinner and thinner as it wound its way up the mountain. I walked, stopped to catch my breath, walked again. With three kilometres uphill and no flat sections, no shade and a climb of 300m, I was suffering in the sun’s blazing heat. Just as I was wondering why I had signed up for this race I reached the water station on top and realised why I had.

Looking down I can see the entire desert that I was running through just a few hours ago. The following six kilometres on the mountain ridge offers amazing views of an unbelievably beautiful landscape – now I don’t ever want this race to end.

Over the final downhill kilometres I can’t stop thinking that this marathon has gone all too fast – although my watch shows that five hours have passed. This has been by far my slowest and most challenging marathon but also the most beautiful and extraordinary. I hear the music and see the Bedouin tent marking the finish area. The speaker calls out my name in congratulations as I cross the finish line and receive my medal. I am exhausted, happy, thirsty – and I want to do it again.