From The Nation newspaper, Nairobi 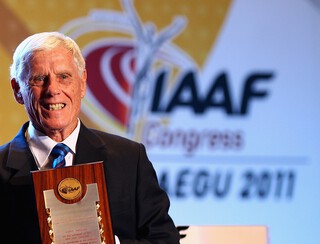 John Velzian, who came from Britain but lived in Kenya since long before independence, died in the early hours of 20 January while undergoing treatment at the MP Shah Hospital, Nairobi.

Velzian was Kenya’s first national athletics head coach until 1968, having led Kenya to their first ever Africa Senior Athletics Championships in 1965.

The African Athletics Development Centre (AADC) secretary Elizabeth Anono, who confirmed his death, said that Velzian was found unconscious by the house help on Wednesday morning. He was then rushed to MP Shah Hospital where he was resuscitated before being admitted to the ward.

Neighbours had to break his door down to gain entry after the house help had tried to wake him up in vain.

“The doctors from the hospital called the house help on Thursday morning indicating that he had passed on,” said Anono, who celebrated Velzian, a former director at AADC as the father of athletics in the country.

“In our lives, there have been few people as special as John Velzian. He was someone that we felt deeply connected to, and even though he is gone, we feel his presence throughout our region,” said Anono.

Anono said Velzian, as long time head of the World Athletics Regional Development Centre in Nairobi, was passionate in ensuring the development of athletics in English-speaking member countries.

The President of Athletics Kenya Jack Tuwei also paid tribute to Velzian. “I think nobody in our current environment can match his contributions to the development of athletics in our country and in Africa,” said Tuwei.

Velzian, who had graduated from Carnegie College of Physical Education in Leeds, United Kingdom in 1954 was hired as a physical education officer in Kenya eight years before the country gained independence in 1963 and has devoted his life to athletics, establishing national athletics standards for school children in Kenya.

In his role as director of the World Athletics Regional Development Centre he discovered, coached and developed talent such as the great Kipchoge Keino, who caught the attention of the world at the 1968 Mexico Olympic Games..  Velzian devoted his life to athletics and established national athletics standards for school children in Kenya.