Course passes through rice fields and alongside temples

Running through the ancient Khmer capital 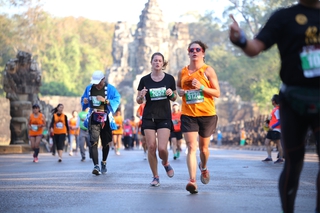 The Khmer Empire was established by King Suryavarman in the early 12th century and by the 13th century, under King Jayavarman VII, it had expanded to cover a vast territory in Southeast Asia.

The Khmer Empire Marathon or Angkor Empire Marathon has been held every August since 2014. Runners enjoy a unique experience, permeated by the ancient atmosphere and the natural scenery. The course passes through forest and rice fields, traditional villages and temples dating from the height of the Angkor era (12th–16th centuries).

The rainy season is in August but on race day the sun shone and temperatures reached 32ºC. The Marathon started at 04.30 and all runners reached the finish line safely even though the slowest of them took until 12.00 to do so. It seemed that they drew their strength and sporting spirit from the ancient surroundings through which they passed.

There is a Half Marathon, 10km and a 3km family run as well as the Marathon and each comprises a single loop. All races start and finish in front of the central sanctuary of Angkor Wat. The name means ‘Temple City’ and it was established at first as a Hindu and later a Buddhist complex. It is the largest religious monument in the world. The temple was built by the Khmer King Suryavarman Il in the early 12th century as his state temple and eventual mausoleum. As the best-preserved temple at the site, it is the only one to have remained a significant religious centre since its foundation. The temple has become a national symbol and appears on the Cambodian flag.

The complex is surrounded by a moat and an outer wall 3.6km long, within which three rectangular galleries are raised, each above the next. At its centre five towers stand in a cruciform formation. Angkor Wat was never completely abandoned, partly because the moat provided some protection from encroachment by the jungle.

Angkor was sacked in 1177 before King Jayavarman VII established a new capital and state temple a few kilometres to the north. Runners pass by here in the later stages of the race.

The course first heads south and passes the Royal Palace of Siem Reap after 6km before crossing the River and turning north along its east bank. Runners pass through the villages of Prasat Kravan, Prasat Bat Chun, Banteay Kdey and Sra Srong, Halfway is reached, after the rice fields at Pre Rup. From 22km runners turn right, eastward, for a 5km out-back section to a turnaround point at Banteay Samre Temple. At 30km runners cross back to the west bank of the river and continue to head west until reaching 37km. At that point they turn south to enter the North Gate of Angkor Thom, the ‘Great City’ which was the last and most enduring capital of the Khmer Empire.

It covers an area of nine square kilometres, At its centre is Jayavarman VII’s state temple, the Bayon, but just before reaching it runners pass by the 350m-long Terrace of the Elephants. This was used by Jayavarman VII as a platform from which to view his victorious returning army. What remains are the foundation platforms of the complex, with the elephant carvings on its eastern face. Runners exit Angkor Thom’s South Gate with about 1500m left to run until they reach the finish line back in front of the Central Sanctuary of Angkor Wat.

Alastair Slade who finished eighth in the Marathon said “the course was good: it was flat, wide and well-marshaled. The out-and-back section through the villages towards Banteay Samre temple, was really well supported. The villagers created a great atmosphere. The volunteers did a great job in providing water and food along the route, and I would like to give my thanks both to them and to those bike riders who kept me company along the way.”

The first full marathon in Cambodia attracted 1237 runners from overseas. The numbers of runners grew steadily to 3500 in 2019, coming from 51 countries. Runners coming from other countries appreciated the sincerity of the welcome they received and the organisers’ gratitude and thanks for sharing their experiences and friendship with the Cambodian people through their participation in this event. Runners’ entry fees helped to support poor children in Cambodia through the Angkor Children’s Hospital, Kantha Bopha Children’s Hospital and the Cambodian Red Cross.

We are waiting to welcome runners from all around the world to our ancient Khmer Capital to participate in our World Heritage Charity Marathon, The Khmer Empire Marathon in the coming year.

See the latest news from The Khmer Empire Marathon