Over 14,200 start after two-year absence – Cherono and Jelagat triumph

Non-professional runners are the stars of Valencia 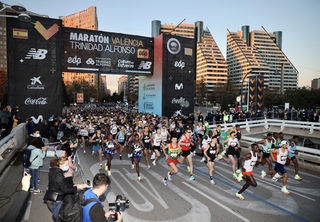 Lawrence Cherono with a time of 02:05:10 and Nancy Jelagat with 02:19:31 have won the 41st Trinidad Alfonso EDP Valencia Marathon on Sunday.

This edition is marked by the return of thousands of non-professional runners to the streets of the city of running after two years of absence in this race.

Cherono crossed the finish line after a very close race, followed by Chalu Deso who was second with a time of 02:05:16 and Philemon Kacheran who crossed the spectacular blue walkway of the Ciutat de les Arts i les Ciències in 02:05:17.

In the female category, after Jelagat, second to cross the finish line was Etagegne Woldu with 02:20:16, followed by Beyenu Degefa who was the third woman with a time of 02:23:04.

However, beyond the times, the main characters of the day were the more than 14,200 runners who set out from the Plaça de la Marató, in an exciting start which for security reasons took place in 15 minute intervals.