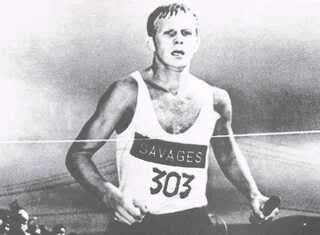 He is one of only a handful of runners who have achieved a Comrades Marathon hattrick, after winning three consecutive editions of The Ultimate Human Race in 1969, 1970 and 1971.

It is with a deep sense of sadness that the Comrades Marathon Association (CMA) learned of Dave’s passing last night (Wednesday, 1 December 2021). He was 78 years old.

Dave Bagshaw ran five Comrades races, earning 4 Gold medals and 1 Silver medal. His maiden Comrades Marathon race was also his fastest in a time of 05:45:35 with his slowest earning him 82nd position in 1975 in a time of exactly 7 hours due to the fact that he had basically retired but returned to run the 50th Comrades Marathon with other winners.

Dave was a phenomenal athlete, having set the Best Time for the Down Run in 1969, then in 1970 doing the same on the Up Run; and in 1971, narrowly missing setting the Best Time again.

Dave was the holder of Comrades Race Number 303 since taking on his very first Comrades Marathon in 1969. He remained a member of Savages Athletic Club for just about his entire running career, prior to returning to the United Kingdom in his later years.

Dave’s first win in 1969 came at a time when Gold medals were awarded to only the first 6 positions, which has since changed and is now awarded to the first ten finishers, both male and female.

Kenny Craig, a close friend and fellow running club member of Dave says, “When Dave arrived in South Africa from the UK, he joined Savages Athletic Club and ran for the club for about 10 years. He worked for Bata Shoes. He was a kind, humble and helpful person and I was touched when he called to wish me for my 85th birthday last year. We had a long chat and it really felt like the good old days.”

Kenny continues, “Dave assisted many runners. He trained very hard on a Saturday and then ran again on a Sunday with those back of the pack runners, giving something back to the running community as he was held in high esteem, having won the Comrades three times. He was very sociable and came to the Savages Club training runs every Tuesday night. He was obviously a top athlete and will be remembered fondly. Those good old days, we will cherish those days!”

CMA Chairperson, Mqondisi Ngcobo said, “Dave Bagshaw lived a life that many of us could only aspire to. He has run his race and he certainly ran it well. Our sincere thoughts are with his family, friends, former running mates and all who knew him.”

Former CMA Chairperson, Cheryl Winn says, “We are deeply saddened by the news of Dave’s passing. Our thoughts and well wishes are with his family. We wish them strength during this difficult time. We remain grateful to Dave for his contribution to the Comrades Marathon and running in general.”

9-time Comrades Champion, Bruce Fordyce said, “Dave was one of my heroes and he inspired me greatly in his day. I met him when we had a Comrades Winners Reunion Weekend in 1983 which culminated in a black-tie dinner where all the winners gathered for a photo in which the oldest winner being Darryl Dale and me, being the youngest, were chosen to hold up the Comrades Winner’s Trophy.”

Bruce adds, “Dave was a quiet and modest guy and I was definitely all the richer for having met him that weekend. He won many races, including the Bergville and London to Brighton Marathons. He was a formidable athlete. Dave’s love for the Comrades Marathon knew no bounds. Earlier this year, he shared a video with us where he ran up a hill in Sheffield, UK on the day of the Comrades Centenary Celebrations whilst we did the 1921 Comrades Tribute Run. He said it was like running up Inchanga. He will be missed but never forgotten.”