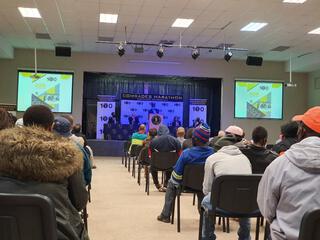 Mqondisi Ngcobo has been appointed as the Comrades Marathon Association’s new Chair while Les Burnard will serve as the Vice Chairperson.

The world’s biggest, oldest and most famous ultramarathon held its Annual General Meeting in Pietermaritzburg on Wednesday 24 November. Members were briefed on the operational and financial facets of the race and they elected one new member to the CMA Board, Vukani Dlamini.

Three members were also re-elected: Pat Freeman, Isaac Ngwenya and Zinhle Sokhela. Two further Board members may be co-opted at the discretion of the Board at their next sitting.

Cheryl Winn, who served as Chairperson of the Association for the past four years, gave a heartfelt address, highlighting the challenges faced by the Association over the past two years, including the cancellation of both the 2020 and 2021 Comrades Marathons; and thanked the Board, Staff, Race Organising Committee as well as their spouses for their support and passion for the Comrades Marathon.

She also thanked all CMA members and past chairpersons with whom she had worked closely and from whom she had learned so much.

The 2022 Comrades Marathon will hold its official media launch on 1 February 2022.