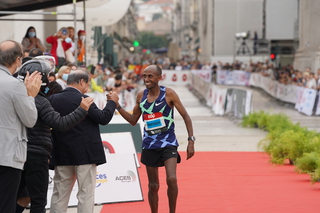 Starting in Cascais and finishing at Praça do Comércio, the course is 100% sea and river side, providing to the runners an unique view along the race.

The Ethiopian athlete ran isolated during the last kilometers and even made a final “sprint” with the goal in sight, finishing in 2:05:52, a personal best and setting a course record surpassing by eight seconds the previous record (2:06:00), which already belonged to him.

At the end of the race, the athlete was pleased with his triumph “especially with his personal record and race record”, stating that he can do even better when he joins “the atmospheric conditions on the course”, as he felt some wind pressure.

Regarding the women’s event, a new Ethiopian triumph, by Asayech Bere, who also surpassed his personal record, setting it at 2:25:07, in a categorical triumph, leaving his compatriot Almaz Fekade in second place, by more than two minutes (2:27:14). The podium was closed by Kenyan Jane Lagat Seurey (2:28:35).

At the end of the competition, at the press conference, Carlos Moia was “very happy for the return of the competition and the beginning of a kind of normal life and an atmosphere of celebration”. More satisfaction for the result of the “efforts we made, ensuring to these athletes the conditions that led them to another competition record and the best marathon mark ever achieved on national marathons”.