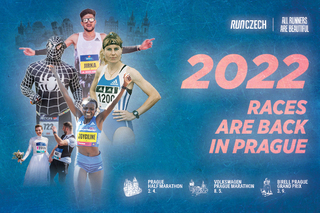 A calendar of the three most anticipated sporting events in the Czech Republic opens for all running enthusiasts: the traditional Prague Half Marathon; the classic Volkswagen Prague Marathon with a dm family run; and the Birell Prague Grand Prix.

All of the above-mentioned races will take place on the traditional dates, i.e. 2 April, 8 May, and 3 September 2022. “We feel confident that there will not be any covid complications, and that lockdowns and restrictions on sports will not happen, as we are adhering to basic anti-epidemic measures”, says Carlo Capalbo, president of the organizing committee of RunCzech. So after months of uncertainty, and the cancellation of past races, the 2022 program will be run in its entirety. A total of 39,000 runners will take part in the above-mentioned three races alone.

In the next few days, all pre-registered runners from previously cancelled races will be contacted by e-mail to confirm their registrations for the individual races that will happen next year. They must decide if they intend to participate. “There is traditionally a huge interest in participating in the Prague races, among Czech and foreign runners. Therefore, we need to find out as soon as possible whether any of the already pre-registered runners have changed their mind, only then can we re-open registrations for the rest of the running world,” adds Carlo Capalbo.

For more than a quarter of a century, the beautiful scenery of Prague has served as a backdrop for one of the most prestigious long-distance races in the world. In addition to runners and their companions, thousands of sports-loving tourists will visit Prague for these events. The races are traditionally broadcast to dozens of countries around the world, and this is a magnificent way to promote the Czech capital. “Previous covid interruptions of city runs have severely affected not only the organizers but also the business community that benefits so much from the throngs of people the races draw. So we are looking forward to seeing Prague streets filled with thousands of active people, especially after this long break,” says Vít Šimral, Prague’s councillor for sports. City runs are traditionally also supported by the Czech Athletic Association (ČAS). “Sport and running, in particular are extremely important for human health and our immunity. Therefore we are very pleased that ways have been found to safely hold large running events despite the ever-present waves of the pandemic,” explains Libor Varhaník, Chairman of ČAS.

RunCzech races have traditionally been linked to charitable causes. And this year is no exception. During registration, competitors can easily contribute to one of the listed charities, for example, to plant other trees in the so-called Marathon Alley, or support for example Salvation Army or Light for the World. The April half marathon in Prague is also part of the European running project SuperHalfs, the start of this series was postponed to 2022 due to the pandemic. In addition to Prague, the cities of Lisbon, Copenhagen, Cardiff, and Valencia also participate in the SuperHalfs project.