1:02:52 time over a minute faster than Ruth Chepngetich’s record 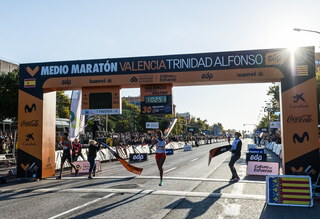 In her debut at the distance Letesenbet Gidey (ETH) shattered the Half Marathon world record by more than a minute with a 1:02:52 win in the Valencia Half Marathon Trinidad Alfonso EDP on 24 October.

Gidey was paced to 5km in 15:00 but then sped up to reach 10km in 29:45 – only seven seconds outside Kalkidan Gezahegne’s new world record for the distance. Now beyond her customary track racing distances of 5000m and 10,000m Gidey kept up the frenetic pace with a 14:44 split to 15km and then slowed only a little in the closing stages.

In the men’s race Abel Kipchumba overtook fellow Kenyan Rhonex Kipruto in the closing stages to win by two seconds in 58:07. The top seven men finished inside 59 minutes.