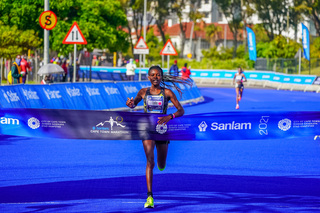 South Africa’s Stephen Mokoka made it two wins from two starts at the 2021 Sanlam Cape Town Marathon, making short work of a stellar international field that had eight sub 2:10 men in the field.

In the women’s race, marathon debutant, Lydia Simiyu stunned a quality field to win in a new course record.

With no pacemakers in the field, the men’s race became a tactical affair, with Mokoka making the decisive break just before 40km. In what started out as ideal conditions, the men’s pace early on was driven by Philemon Mathipa and Sbonisi Sikhakhane. A big pack of around 20 athletes went through the halfway mark in 65:50, with all the bigger South African names, such Philani Buthelezi, Mathipa, Sibusiso Nzima, David Manja and Melikhaya Frans very prominent in the front.

With wet and slippery roads due to the overnight rains, none of the athletes was going to go out too fast, especially around the corners. But the slow pace eventually had to give, and it was Kenya’s Alex Saekwo who started the first big surge of the day as the runners approached the Hartleyvale Hockey Astro. When the athletes went through 30km in 1:33.13, the lead group had been whittled down to 10, including Ethiopia’s Ameta Belachew, a 2:07.50 marathoner, Melikhaya Frans, who was on course to a sublime Personal Best, Lesotho’s Tebello Ramakongoana and another Ethiopian, Gebru Redagne. Also still in that group was Sbonisi Sikhakhane, who, like Frans, was having a fabulous race.

Saekwo continued to surge with Mokoka keeping a close eye on proceedings and throwing in the occasional surge of his own. As they hit 35km, it was down to seven athletes, Mokoka, Frans, Belachew, Sikhakhane, Redagne, Saekwo and Ramakongoana, with Mokoka now very much making his presence felt and controlling things from the front.

As they hit the Sea Point Promenade, Sikhakahne started to drop off. At 39km Frans and Saekwo couldn’t stay with the sustained effort of Mokoka, and they too started to go backwards, with Belachew starting to fade shortly after.

Mokoka made his final move just before 40km and dropped Redagne and Ramakongoana to speed away and come home for his second victory in two starts of the Sanlam Cape Town Marathon, crossing the line in 2:10.01.

“It was important to me to win at home again,” said Mokoka. “I knew it was always going to be a tactical race as there were no pacemakers, so I stayed in the bunch and only started to show some aggression after halfway. When I broke away just before 40km and the guys couldn’t respond, I knew I had won.”

For Mokoka the win was just reward after a hard year in which he had to withdraw around 35km into the Olympic Marathon, clutching his stomach in agony.

The Sanlam Cape Town Marathon was also a big “victory” for Eastern Province’s Melikhaya Frans who knocked more than two minutes off his previous best of 2:13.50 to finish 6th in 2:11.28 – a World Championship qualifying time for 2022.

In the women’s race, unheralded 25-year-old, Lydia Simiyu made history after smashing the course record and running the fastest ever women’s marathon time in South Africa, on debut.

Simiyu came into the race as a novice and a dark horse as very little was known of her. Prior to today’s race, she had only ever run in two road races, both Half Marathons, and boasted a best of 1:10.17 for distance.

But Simiyu ran the race like a veteran, letting Gerda Steyn do all the work, and pouncing in the latter stages of the race. Her opposition should have been wary of her though, as she trains with Purity Changwony and Ruth Chebitok in Kapsabat. Her training partners have marathon times of 2:22 and 2:23 behind their names respectively.

The South African Steyn pushed the pace from 10km and at one stage the projected winning time was a sub 2:25, but in the end Steyn’s aggressive front running cost her as she fell off the pace at around 38km. That left Simiyu, fellow Kenyan, Lucy Karimi, who had the fastest marathon time in the field (2:24.24 – Geneva, 2021) and Ethiopian Aynalem Teferi to battle out the podium positions.

Simiyu had the freshest and strongest legs and started a concerted push for home from around 40km. Immediately, Teferi fell off the pace and Karimi was desperately hanging on to Simiyu’s coat tails. But Simiyu surged again with 600m to go and Karimi had to concede. Simiyu crossed the finish line outside the Cape Town Athletics Stadium in 2:25.44, some 11 seconds ahead of Karim (2:25.55) with Teferi rounding off the podium (2:26.12).

Said Simiyu after the race, “I came here to win, but I also wanted to run 2:24 or faster.” In only her third ever road race, the future is very bright for Simiyu.

“It was fantastic to stage the first major running event in South Africa this year,” said Sanlam Cape Town Marathon Race Director, Renee Jordaan. “It was great to see some exciting racing from our lead runners, and we congratulate every single participant who joined us today.

“The running community really embraced the event, and they were particularly excited about the staggered start and mat-to-mat timing this year.

“We are also pleased that we had no serious medical incidents, and would once again like to thank the City of Cape Town for all their support and road closures, thereby helping us stage another safe event.”

Added Sanlam’s Head of Brand, Mariska Oosthuizen, “Huge congratulations to the runners and spectators this year. It has truly been an astounding success and we thank our partners – the Sanlam Cape Town Marathon race organisers – for their tireless energy and vision in making it so.

“Right at the start, we set a shared goal to create a race that’d compete with the world’s best. We pursued it relentlessly, with fortitude and determination. That’s what ‘living with confidence’ means. And now, this event is on the verge of being the seventh Marathon Major in the world. Thank you to everyone who took part this year. It was one of the first mass participation events in the country since Covid-19, and we are so proud of how seamlessly and safely it was executed.”