Royal Victoria Half celebrates a return to racing 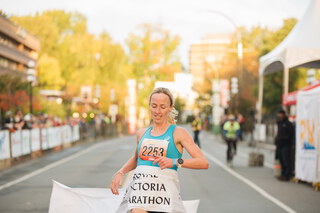 Sunny but cool and windy weather greeted over 4,000 participants in the Royal Victoria Half Marathon and 8K, the first in-person road race that the capital of British Columbia, Canada has seen for over 18 months.

Mathew Travaglini and Leanne Klassen won the Half Marathon and Reid Muller and Sarah Inglis won the 8K, with Inglis setting a new course record for the second year in a row. The Half Marathon had 2,715 registrants and the 8K 1,704 for a total of 4,419.

Travaglini, from Calgary won in 1:06:44 closely followed by Coquitlam’s Brendan Wong in 1:06:53. Third was Logan Roots from Courtenay finishing in 1:10:00. Top master was Jeff Vogt from Kelowna (1:14:24). This was Travaglini’s first time running the RVM Half Marathon – he has run the TC10K twice – and he came to the race confident having won the Calgary Half Marathon last month. “This course was gorgeous and one of the best I have raced,” he said. “There was a head wind particularly between 17 and 21 kilometres which made it interesting.”

Klassen – also from Calgary – was a favourite to win and she didn’t disappoint hitting the tape in 1:17:15. Second – and top master – was fellow Calgarian Maria Zambrano in 1:18:16 and third was local athlete Chloe Hegland finishing in 1:18:40. Klassen hadn’t done a lot of running during the pandemic, training on her own and running mainly virtual time trials. “Not having done any racing for 20 months it is so cool to win,” she said. “This was my first time running here and it was a beautiful course but challenging with the head wind. There were so many on the course cheering us on it felt great.”

Inglis, from Scotland, was pleased with her win considering she had been injured during the summer. “I only really had five weeks of training, so I had no idea how I was going to do today.” She has been living and training in Surrey for the last eight years and even though she still represents Great Britain – she will be running in the World Athletics Half Marathon Championships in China in March 2022 – she races as much as she can in Canada. Her next competition is the 10K Canadian Championships next weekend.

The men’s race was won by Langley’s Reid Muller in 24:00, second was Kevin Friesen from Nanaimo in 24:10 and third was Vancouver’s Theo Hunt in 24:21. Victoria’s Matthew Carlson was the top master finishing in 27:33. Muller, a track and cross-country specialist in his senior year at Washington State University, also set an age group record in the M20-24. The record has stood for 35 years (Gary Barber: 24:20).

“Despite the headwinds on Dallas Road we had some great racing today”, said Jonathan Foweraker, President, Victoria Marathon Society. “The race went off without a hitch due to all the hard work of the Race Committee and volunteers; everything was so well organized. We look to return next year with the Marathon and the Kids Run to make this a complete weekend of running.”