Marathon triumph for Hirschhäuser and Harrer in Munich’s Olympic Stadium 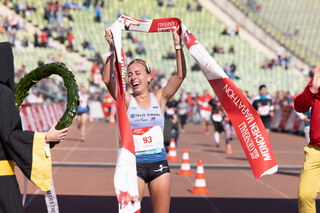 Alexander Hirschhäuser and Corinna Harrer won the Generali Munich Marathon and took the national championships which were included in the race. The event was the third race in Germany to go ahead with more than 10,000 runners during the Corona pandemic.

In the past two months Berlin’s half marathon and marathon races were staged successfully in the capital. Similar to Berlin, Munich organisers had provided a detailed hygiene concept and got the go-ahead from the relevant authorities in Munich just a month ago. Including events at 10K and the half marathon distance, 10,659 runners from 85 nations took part in the 35th edition of the Generali Munich Marathon. The traditional race, which started and finished in Munich’s iconic Olympic Stadium, is a World Athletics Label Road Race.

While it was not possible to assemble an international elite field at such short notice the German marathon championships were included last minute in the Generali Munich Marathon. In fine but very cool conditions at first, it was Alexander Hirschhäuser, who took the lead from Tom Thurley before the 30km mark. The 29-year-old was then never challenged and clocked a personal best of 2:18:38. “I am proud that I kept going despite some bad patches,” said Alexander Hirschhäuser, who indicated that he will try to bag a place on the German marathon team for the European Championships which will be held in Munich next summer. Anthony Tomsich, who has US and German citizenship and lived in Germany recently, came through from sixth place at half way to take second in 2:19:30. “It was a great race, something we all missed for so long,” said Anthony Tomsich. Three weeks after dropping out of the Berlin Marathon Philipp Baar was third in 2:21:03.

Corinna Harrer moved clear of Isabel Leibfried at around 35k in the women’s race. The former European Indoor 3,000 m silver medallist (2013) clocked 2:43:11 to take the German marathon title for the first time. “To win the German Championship race in front of a home crowd is amazing. It was thrilling to run into the Olympic Stadium for the finish,” said the 30-year-old Corinna Harrer. Behind second-placed Isabel Leibfried, who clocked 2:44:09, Switzerland’s Andrea Meier took third in 2:46:58.

“It was a great event with a superb atmosphere,” said race director Gernot Weigl. For the first time the Generali Munich Marathon is among the Label Road Races of the international athletics federation World Athletics. “We have decided to develop the international potential of our race much stronger than in the past. Clearly the city of Munich is a major international tourist destination. And there could not be a better opportunity for runners to visit this great Bavarian city than for the marathon,” said Gernot Weigl, who intends to establish the Generali Munich Marathon as a top international elite road race as well. From 2022 onwards he will therefore cooperate with an established elite race coordinator.

The fact that the Munich Olympic Games from 1972 will be 50 years ago in 2022 might further boost the attractiveness of the Generali Munich Marathon, which will be staged on 9 October next year. While the current course is much more attractive and has little in common with the route the athletes took in 1972 the main feature is the same: the start and finish in the Olympic Stadium.

Just a few days ago organisers of the Generali Munich Marathon were able to announce further good news. Italian company Generali, which is already involved in a number of international road races, has renewed their contract with the event in Munich. “With regard to our goal to develop the race further internationally we are delighted that Generali shares our aims, continues to support us and has committed to the title sponsorship for another three editions until 2023,” said Gernot Weigl.