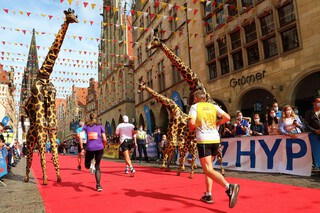 A terrific atmosphere at the start, along the course and at the finish resulted in happy runners as they crossed the line on Münster’s Prinzipalmarkt square.

Although the organisers had not invited any elite runners, the race was won by African participants Samuel Lomoi and Monica Cheruto, who had registered and travelled to Münster at their own expense. Elias Sansar was the fastest German man, coming in third around three minutes ahead of anyone else. The fastest German woman was Johanna Rellensmann whose performance – 2:44:09 – was eagerly awaited after she ran a top time of 1:16 in the Dresden half marathon earlier in the year.

Only in July was the final decision taken to let the race go ahead. The good relations between the city council and the organisers made it possible even though Corona restrictions were changing all the time – but still all the organisation had to be done in just two and a half months, when usually much more time is needed.

See the latest news from Volksbank-Münster-Marathon