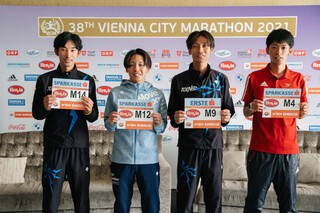 With a strong quartet of Japanese elite runners headed by Kento Kikutani the Vienna City Marathon will go ahead for the first time since April 2019 on Sunday.

Austria’s major road race event sees its 38th edition and organizers have registered around 26,000 entries. This includes races at shorter distances. Around 6,000 marathon runners will compete in Vienna on Sunday. The Vienna City Marathon will be the first major marathon worldwide with a strong international elite field and a mass race since the start of the Corona pandemic. It is a World Athletics Label Road Race.

It is the first time in the history of the Vienna City Marathon that a Japanese male elite team will be on the start line. And partly this development has to do with Eliud Kipchoge. When the Kenyan Olympic Champion broke the two hour barrier in the Austrian capital two years ago the world took notice of a unique running spectacle co-organized by the Vienna City Marathon. Back in Japan Kento Kikutani, Yuta Koyama, Koki Yoshioka and Daji Kawai all watched Kipchoge’s race through Vienna’s Prater Park, which is also part of the marathon course.

“I was watching the live stream. This was a huge effort by Kipchoge. I think that good weather conditions in Vienna had a big influence on the result,” said Kento Kikutani, who has a personal best of 2:07:26 from Lake Biwa this year. He is the fastest of the Japanese quartet and wants to improve his personal best on Sunday: “I will follow to pacers and then I want to go for the win after the 30k point,” said the 27 year-old, who then hold up his watch during the press conference: “At least I already have the same watch Kipchoge used in Vienna!“

Yuta Koyama has a personal best of 2:08:46 and is the second fastest of the four Japanese. He is also ready for a fast race and possibly a personal best. “My plan is to go with the leading group,” said Koyama, who also clocked his PB in Lake Biwa this year. “Vienna is a good opportunity for me to race despite the corona pandemic.”

Koki Yoshioka and Daji Kawai feature personal records of 2:10:13 and 2:10:50 respectively. Both target their personal bests on Sunday. “I really appreciate that I am able to run here during the pandemic. My goal is to go under 2:10,” said Yoshioka while Kawai stated: “Vienna is a traditional race and I am happy to run here. As there are pacers, I think the race will have a good pace. I want to stay calm and will then decide how to react.”

“This will be the most important Vienna City Marathon since the first edition back in 1984,” said Race Director Wolfgang Konrad. “On Sunday we will send a strong message as the first major international marathon worldwide since the start of the pandemic.” He compares the situation to when he was an elite runner back in the 1980s. “After a fine Olympic season I was injured in a car crash in 1980. When I could finally start running again I had to stop after two kilometers. Four months later I ran a PB,” recalled the former steeplechaser, who achieved a fine PB of 8:17.22 in 1982. “Back then it was just about me, now it is about everyone. We were desperate to bring the race back on as early as possible. It was a disaster for us when we had to cancel on short notice in 2020. But we continued to work hard to make the race possible again.”

“We want to stage a great race that stands for joy and motivation. With this event we also want to say thank you to all those who have supported us during this very difficult time,” said Kathrin Widu, one of the Managing Directors of the Vienna City Marathon. She explained that runners from 126 nations entered the race. “Most of the foreigners are obviously from EU countries.” While over 90% of all runners are vaccinated organizers have implemented strict hygiene rules. Everyone needs to provide a negative Corona test to receive the bib number.

Fellow Managing Director Gerhard Wehr said: “We have never been out of touch regarding organizing races. Under most difficult situations we did stage a number of smaller races whenever possible. We are now experiencing a very strong togetherness from all those involved. Everyone wants the Vienna City Marathon to come back.”