Kay-El. Not Superman’s name in Kryptonian but the capital city of Malaysia, officially known as Kuala Lumpur but universally abbreviated to its initials. It plays host to the Standard Chartered KL Marathon annually – and some might say you need superman-type resolve to complete the KL marathon.

A journey of new and old 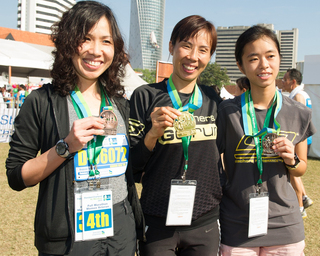 Yuan Yu Fang, the winner of the Marathon Malaysia Women category is flanked by Loh Chooi Fern, the first-runner up on her left and Choong Swee Ying, second-runner up on her right.
Photo: A Fai
© A FAI

The Marathon held its inaugural race in 2009 with 13,500 runners (in total) and in 2013, 33,000 runners registered. With over 4400 runners in last year’s 42.2km race, at the time of writing the Standard Chartered KL Marathon is the largest in Malaysia. Over 2500 runners were from outside Malaysia including both expatriates resident in Malaysia and running ‘tourists’. There were 45 who came from the specialist ‘running nations’, namely, Kenya, Ethiopia and Zimbabwe.

The race had traditionally been held on the last Sunday in June, but last year presented a whole new set of challenges. Smoke from open fires burning in Indonesia blew over the Straits of Malacca and engulfed Malaysia and Singapore in a thick blanket of smog. The Air Pollutant Index showed the air to be at its worst quality in Malaysia for over a decade. With three days to go before the race was due to be held the organisers announced a postponement to 29 September. Tears flowed.

When the new race date came around Kennedy Kiproo Lilan emerged as the winner in a sub-2:20 time that fell well short of his own 2:14:45 course record set the year before. Rose Kosgei won the women’s race, also outside the 2:34:37 course record set in 2011 by Rose Kerubo – who finished third. While Kenyans swept the top positions the Marathon also honours its home-grown talents with Malaysian categories. Fabian Osmond Daimon claimed top spot with 2:41:55 ahead of three-time winner, Shaharuddin Hashim. Yuan Yu Fang was the first Malaysian woman with a time of 3:37:16.

The route, often described by runners as an ‘undulating course’, can also prove to be a challenge. While relatively flat there are some inclines and dips with the most elevated portion around 36km. At this point it is not uncommon for supporters to hear some very flowery curses but once over it the cries of jubilation are even louder.

The marathon starts and finishes right in the middle of the city, at Independence Square (Dataran Merdeka in Bahasa Malaysia, our native language) and traces a route that makes one big loop in, around and back into the city. Dataran Merdeka is where the Union Jack was lowered and the Malayan (Malaysia was then known as Malaya) flag was raised for the first time, at the stroke of midnight on 31 August 1957.

Directly overlooking Dataran Merdeka is the Sultan Abdul Samad Building, built by the British in 1897. The Marathon is flagged off directly beneath the clock tower of the building, which was used to mark the independence of Malaysia.
The marathon route passes several landmarks unique to KL namely, the iconic Twin Towers, the National Monument, the breathtaking Thien Hou Buddhist Temple, the colourful Little India quarter, the majestic National Mosque, the King’s Palace and the Parliament Building. The route takes you on a journey of new and old. You will run past sky-scrapers and buildings barely five-years old standing proudly besides remnants of the British legacy.

Malaysia is home to three major ethnic groups: Malays, Chinese and Indians. And while your eyes feast on the constantly evolving façade of the city, rich multi-racial rhythms play out in front of you. Drummers and musicians are spread out along the route to cheer you on in their own special way: the mellow thumping of the Rebana Ubi (Malay drums); the vibrant beats of the Mridangam and Tabla (Indian drums); the strong resonance of the Da-tang-gu (Chinese drums). Together they carry you through to the finish line, with players dressed in their respective traditional attire. Combining that with the superheroes who take to the streets and the family of fruits that run each year and you’ve got the ingredients for a street party. This time we spotted Superman, Batman, Spiderman, Bruce Lee, a banana and an apple in the mix.

The Standard Chartered KL Marathon offers shorter distance categories for enthusiastic runners aspiring towards the marathon: 21.1km, 10km, a 5km fun run and children’s categories running 2.5km and 700m. The starts are at different locations but everybody finishes at Independence Square. The challenge, the fun and the camaraderie is for everyone.