Tokyo finally gets its Marathon fix 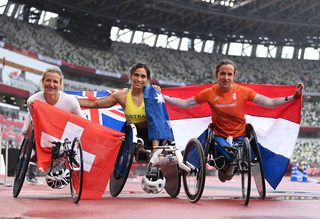 Unlike the Olympic Marathons, which had been hived off to the city of Sapporo 800km to the north in the hope of less hostile weather conditions, the Paralympic Marathons were hosted alongside most other sports – in Tokyo.

One month later in the year was deemed sufficient to anticipate that Tokyo’s dependably steamy summer heat would have waned enough to present Paralympic endurance performers with reasonable running conditions.

The weather broke the night before the races and wheelchair athletes and runners were greeted with sodden conditions on race morning. Although the wheelchairs must have flicked up spray directly into the racers’ faces it appeared to be the camera crew who were tested more. Runners – and it seemed Japanese runners in particular – mostly thrived in the conditions.

Having missed out on any marathon medals in the Olympics a month before the Host nation could hardly have hoped for a better finish on the final day of the Paralympics as the Japanese men took bronze in two classes and world-record holder Misato Michishita upgraded her silver from Rio 2016 to take the gold medal in the women’s T12 (sight-impaired) marathon.

“I felt the power of the people cheering, supporting us. The Paralympic Games were held in Tokyo, in our home country. Their cheering pushed us a lot,” Michishita said. "While running, I heard the voices of my coaches and people that I know, who gave us a big energy. So I was very excited to run here.”

First off were the men’s wheelchair racers, followed 10 minutes later by the women. Marcel Hug was the race favourite among the men, having earlier won gold medals in his class at 800m, 1500m and 5000m.
He readily took the lead but China’s Yong Zhang stuck to him doggedly as they built up a lead of two minutes over a chasing group of four in the first half of the race. It looked as if there would be a sprint finish to decide all three medals but, although Zhang was effectively saving himself by slipstreaming Hug, the Swiss powered away up a slope to the 40km point and swept around a corner to give himself a decisive break. Hug increased his lead to win by about 150m. Behind him Daniel Romanchuk (USA) used exactly the same tactic to escape from the chasing group and take the bronze medal.

In the women’s race the American Susannah Scaroni raced into the lead and by 25km had built a 90-second advantage over the chasing pack. But her solo effort took its toll. Her lead dwindled until she was caught and by 40km was trailing by a minute. For three of the five who passed her it was all left to play for in the final kilometre. Australia’s Madison de Rozario entered the stadium with a small lead as Switzerland’s Manuela Schaer closed the gap and looked poised to pounce in the home straight. But de Rozario held her off as the pair crossed the finish line less than a second apart. “That was the longest 500m I’ve ever pushed through,” said de Rozario. “To come into the stadium with a bit of a gap was nice… that finish line couldn’t come quick enough.”

Li Chaoyan was defending the title he won in Rio 2016 in the T-46 (limb disability) category but ‘defensive’ was hardly the word for the surge he put in at halfway. Tsutomu Nagata went with him while Alex Pires De Silva let them go. Li soon dropped Nagata, going on to set a new Paralympic record of 2:25:50, while Da Silva’s strong finish took him past Nagata for the silver medal.

In the men’s T12 (visually impaired) race Morocco’s El Amin Chentouf raced away to hold a 2 minutes 30 seconds advantage by halfway. He continued in splendid isolation to finish 4:26 ahead of Australia’s world record holder Jaryd Clifford. Japan’s Tadashi Horikoshi gauged his effort finely after the chasing pack broke up. Initially holding back, he later regained ground to put himself into the bronze medal position after 35km.

Then the grand finale came as Michishita took to the stage. In her short-stride pattering style she played a waiting game until the Russian Elena Pautova seemed to be edging ahead. As if this was the signal she needed Michishita raised her pace and from 30km built up a winning margin of nearly three and a half minutes.

“And with that, the Tokyo Paralympics were over,” wrote Brett Larner of Japan Running News. “Despite the rain, the early start, the serious state of the pandemic, and organizers’ efforts to discourage people from spectating on the course, crowds lined the route everywhere we went. And we didn’t even go to any of the most popular spots where you could see runners three times without having to move. Few cheered out loud, most just clapping – an acknowledgement of at least one of the government’s requests for how to act during the pandemic.

“The MGC Race Olympic trials (held in 2019) and the promise it had for the kind of crowds that would turn out seem like a distant memory now. But the crowds were still some of the biggest in Paralympic history, if not the biggest. Can you imagine what they would have been like if the Olympic marathons had been in Tokyo? And without the pandemic?”