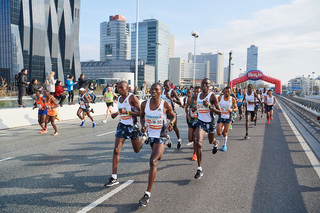 Ethiopians Betesfa Getahun and Gelete Burka will be the fastest athletes on the start list for the Vienna City Marathon next Sunday. They feature world-class personal bests of 2:05:28 and 2:20:45 respectively.

The 38th edition of Austria’s biggest road running event is the first major international marathon featuring a strong international elite field and a mass race since the start of the Corona pandemic. Including races at shorter distances a total of 25,000 athletes have registered for the event. 6,000 of them will run the marathon. The Vienna City Marathon is a World Athletics Marathon Label Road Race.

Betesfa Getahun heads the elite start list which includes ten runners who have personal bests of sub 2:10. The Ethiopian ran 2:05:28 in his debut marathon in Amsterdam two years ago. Returning to the Vienna City Marathon will be Switzerland’s record holder Tadesse Abraham, who was the runner-up here in 2019 with 2:07:24.

With a personal best of 2:06:40 Tadesse Abraham is among the fastest European marathon runners. Due to breathing problems he dropped out of the Olympic marathon in Sapporo (Japan) a month ago. While this was of course a major disappointment he then quickly decided to go for the Vienna City Marathon. “I am in form and I want to show it. I am really looking forward to Vienna as I have such great memories of this race,” he said.

The women’s field includes six runners with personal bests of sub 2:28. Gelete Burka is the fastest on the start list with 2:20:45. She achieved this time in Dubai in 2018 and then won the marathons in Ottawa (2018) and in Paris (2019). The women’s race will also feature the Swiss marathon record holder: Fabienne Schlumpf ran 2:26:14 in her debut in Bern earlier this year and then finished in a very strong 12th position at the Olympic marathon.