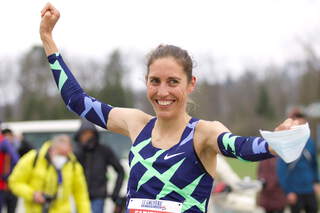 Gelete Burka and Fabienne Schlumpf will head the women’s field of the Vienna City Marathon, which will take place on 12 September.

With a personal best of 2:20:45 Ethiopia’s Burka will be the fastest woman ever on a start list for Austria’s most prestigious and biggest road running event.

The Vienna City Marathon will see its 38th edition next week and organizers currently have registered a total of around 25,000 athletes. While this includes races at shorter distances there will be 6,000 marathon runners. Some of the events will take place on the Saturday.

The Vienna City Marathon is a World Athletics Marathon Label Road Race and will be the first major international marathon featuring a strong elite field and a mass race since the start of the Corona pandemic. After providing a hygiene concept organizers received the final go ahead from the city a couple of days ago.

Gelete Burka has been a very successful track and cross country runner. The Ethiopian took the World Cross Country Championships’ gold medal in 2006 (short course) and won the 1,500 m final at the World Indoor Championships two years later. In 2015 she was second in the 10,000 m final of the World Championships. By that time she already had a few attempts at the marathon distance. However despite a personal best of 2:26:03 from 2014 in Houston she did not manage to transform her great potential to the classic distance. It was then in Dubai 2018 when she returned to the marathon after a four-year break and achieved a breakthrough performance: Gelete Burka improved to 2:20:45 in the Emirate.

There was more success in the marathon for Gelete Burka after her sixth place in Dubai: In May that year she won the Ottawa race in 2:22:17, then she took the Paris Marathon in 2019 with 2:22:47. A third place in the Chicago Marathon (2:20:55) followed later in the year. The Vienna City Marathon will now be the first marathon for the 35 year-old since 2019.

In contrast Fabienne Schlumpf is still a newcomer to the marathon. The former steeplechaser, who took the silver medal at the European Championships in 2018, first ran a series of national records in the half marathon. Last autumn she achieved a very respectable 13th place in the World Half Marathon Championships with an improvement to 68:38. She then took the Dresden Half Marathon this March with 68:27. Easily breaking the Olympic qualifying standard she clocked 2:26:14 in her marathon debut in Bern in April when she took second place. Fabienne Schlumpf then ran her second marathon at the Olympics in the extremely tough conditions in Sapporo. She achieved a superb 12th place in 2:31:36 which suggests that there is much more to come from the 30 year-old in the marathon. “I had already planned to run Vienna after the Olympics for a long time,” said Fabienne Schlumpf.

Gelete Burka and Fabienne Schlumpf will face a group of strong Kenyan contenders at the Vienna City Marathon. Risper Chebet is the second fastest on the start list with a personal best of 2:23:45. She achieved this time when she was fifth in Milan earlier this year, improving her PB by almost four minutes. Returning to the Vienna City Marathon will be Rebecca Kangogo and Celestine Chepchirchir. Kangogo ran her personal record of 2:24:25 here when she was runner-up in 2017 while Chepchirchir was third in 2018. She has a personal best of 2:24:48 from Seoul in 2019.