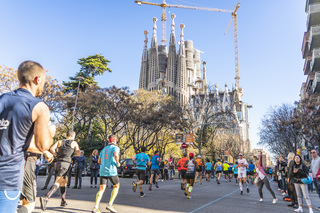 On 7 November Barcelona will once again show its best face to the world with a cosmopolitan marathon whose route passes the most emblematic places in the city.

After a year of global change and transformation the Zurich Marató Barcelona is born again, stronger than ever, to offer participants a magical experience with Barcelona’s urban landscape as a backdrop. The Marató is special, and that is down to the city that hosts it; a city with an open cosmopolitan spirit. Its Mediterranean character and Modernist past has left a singular, instantly identifiable architecture and a cuisine that is admired the world over.

In recent times the capital of Catalonia has won hearts the world over. Thanks to its many tourist attractions, and the well-ordered “Eixample” quarter (dating from the mid-19th century), the city was able to transform itself and become the focus of world attention when it hosted the 1992 Olympic Games.

Barcelona is open, hospitable, inclusive, multicultural and friendly to visitors. Its world-famous cuisine, pleasant year-round climate and wide range of cultural events make it the ideal city to visit and return to time and time again.

The Zurich Marató Barcelona is a massively-attended race with runners from all over the world. Runners come ready for a great personal adventure and to enjoy one of the most beautiful cities on the planet. It’s a weekend to be shared with the family thanks to the large number of parallel events. There is the Expo Sports, a “runners’ fair” where participants collect their race number (bib), T-shirt (in 100% recycled polyester used by Asics, the technical sponsor) and runners’ bag. There is the Kids Race on the day before the Marathon. The festive Breakfast Run follows the last few kilometres of the 1992 Olympic Marathon route and gives participants the unique opportunity of entering the ‘Lluís Companys’ Olympic Stadium. Then there is the Pasta Party, a convivial meal enjoyed by the participants the day before the race.

The Marató is a blend of sport, leisure and popular festivities: there are 40 entertainment points along the route. The course has been improved to make it faster and of almost 20,000 runners who took part in the last edition many recorded personal best times.

Avenida María Cristina, with the Palace of Montjuïc and the Magic Fountain (Fuente Mágica) in all their splendour, is the ideal place to start and finish the race. The route passes the main tourist attractions of the city: the Camp Nou (home to FC Barcelona); the stretch along Passeig de Gràcia with Casa Batlló looking down on the runners; the imposing Sagrada Familia; the Arc de Triomf. Then there is the monument to Christopher Columbus on the waterfront and the Torres Venecianes as the last architectural highlight on the route. All these will help to keep runners motivated right through to the finish.

The spotlight is always on the runners. Theirs is a unique journey that starts the moment they register for the race and ends when they cross the finish line to collect their coveted finisher’s medal. From the biggest to the smallest, from the locally-born to those from the other side of the world, from the tenacious wheelchair competitor to the gutsy winner: every one of you, together with the hundreds of volunteers, entertainment teams, medical services, physios and citizens in general, make the Zurich Marató Barcelona a magical experience.

This year, if you run you will have already won.