“Strongest-ever” field of US women promised 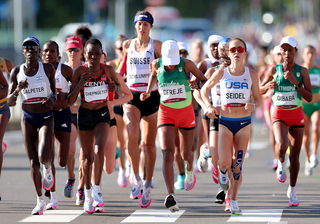 Olympic medalist Molly Seidel will make her TCS New York City Marathon debut after winning bronze at the Tokyo Games, leading what will be the strongest-ever field of American women in the race at the event’s 50th running on Sunday, 7 November.

In her third marathon ever Seidel won bronze at the Tokyo Olympics. She held on to the lead pack for the entire race to finish in 2:27:46 and became only the third American woman in history (after Joan Benoit in 1984 and Deena Kastor in 2004) to medal in the Olympic marathon. In her first career marathon – the 2020 U.S. Olympic Marathon Trials – Seidel finished as the runner-up in 2:27:31, becoming the youngest American woman to make an Olympic marathon team since 1992. Later in 2020, she went on to finish sixth in her second career marathon in London in 2:25:13.

“Since the beginning of 2021 I’ve had two races circled on my calendar,” said Seidel. “The Olympic Games Marathon on 7 August, and the TCS New York City Marathon on 7 November. Winning the bronze medal in Sapporo showed that I can run with the best in the world and, on any given day, anything is possible. I can’t think of a better year to run my first New York than in its 50th running.”