Your chance to be a world leader 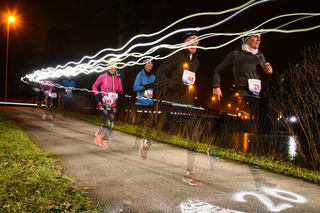 The Neujahrsmarathon Zurich is a unique event that makes it possible to fulfil your resolutions before the New Year really gets going.

It offers the chance to set a personal best on New Year’s Eve and to start the New Year running under the night sky lit by fireworks.

Start the New Year with an unforgettable sporting highlight. For the next edition, as well as the title race, there will also be a half marathon, a quarter marathon, a team run (two to four team members) and a 750m kids’ run. In the children’s race, thanks to our sponsors, all runners from 3–14 years of age start free of charge.

The race starts on the very first second of the year, making the Neujahrsmarathon Zurich the first AIMS running event of the year and hence the performances of the winners automatically qualify as first official world leading times for the year.

With its unique start time, the Neujahrsmarathon Zurich attracts ambitious runners who, once in a lifetime, want to set a world leading time or at least a national leading time. On the other hand, when the bells strike midnight and the fireworks show begins, there are also many people at the start line who just want to begin the New Year doing what they love.

On 1 January all runners start together at midnight in the middle of the sports hall in Schlieren, Switzerland. The race is a loop course beside the river Limmat amounting to exactly 10.54875km – which means that four loops equal a marathon. The runners run through the sports hall after each lap to be cheered on by family, friends and spectators. The race is subject to a time limit of five hours, which may be extended in case of bad conditions such as snow and ice.

The Neujahrsmarathon Zurich was born 18 years ago in 2003: five running enthusiasts decided to make the idea of ​​a marathon at the turn of the year a reality. On 1 January 2005 the time had come and 151 marathoners stood at the start line. Since then the Neujahrsmarathon Zurich has grown progressively and regularly attracts over 1000 runners from more than 50 different countries.

Anyone who does not want to run is welcome at any time as a helper, sponsor, spectator or party guest in our festival restaurant. Thanks to our “Action 1 + 1” commitment runners who bring a helper start the Neujahrsmarathon Zurich for free.

We cancelled last year’s Neujahrsmarathon Zurich with a heavy heart, but are all the more pleased to start this year’s preparations for the 17th edition of the race with an enlarged organizational committee. If the COVID-19 situation persists and the race has to be cancelled registrations that have already been made will automatically be carried over to the next event without any deduction of costs.