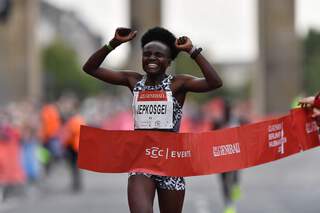 Joyciline Jepkosgei won the Generali Berlin Half Marathon on 22 August with a spectacular course record of 1:05:16.

Second-placed Kenyan Nancy Meto was just five seconds behind, improving her PB by more than three minutes. With 1:05:21 she was also inside the former course record. Valary Aiyabei completed the Kenyan podium with 1:07:32 for third place.

Kenya’s Felix Kipkoech clocked a world leading time of 58:57. The 23 year-old improved his own world lead by 38 seconds. Fellow Kenyans Josphat Tanui and Philemon Kiplimo followed in second and third with 59:40 and 59:54 respectively.

A total of 15,096 starters from 130 countries had entered the 40th edition of the Generali Berlin Half Marathon. 14,508 of them were runners, 572 skaters, 14 handbikers and two wheelchair athletes.