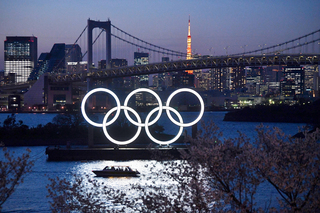 TOKYO, JAPAN - MARCH 25: A boat sails past the Tokyo 2020 Olympic Rings on March 25, 2020 in Tokyo, Japan. Following yesterdays announcement that the Tokyo 2020 Olympics will be postponed to 2021 because of the ongoing Covid-19 coronavirus pandemic, IOC officials have said they hope to confirm a new Olympics date as soon as possible. (Photo by Carl Court/Getty Images)
Photo: Carl Court
© 2020 Getty Images

In the wake of the Tokyo Olympics Video Research, Ltd. announced that the closing ceremony had a viewership rating of 46.7% in the greater Tokyo metropolitan area, slightly less elsewhere.

The company calculated that 46,997,000 people nationwide had watched the closing ceremony in realtime.

The event broadcast that earned the highest viewership was the men’s baseball final on NHK on 7 August when Japan defeated the USA. to win the gold medal, at 37.0% Second was NHK’s broadcast of the Aug. 8 men’s marathon, where Suguru Osako placed 6th, which earned 31.4% viewership in its second half. Third was the men’s soccer semi-final match on 3 August where Japan lost to Spain in extra-time, at 30.8%.