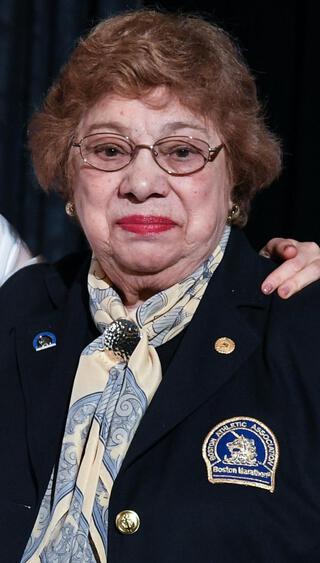 Boston Athletic Association has announced the loss of Gloria Ratti, a trailblazer, leader, and loving matriarch of the New England running community.

Gloria passed away peacefully on 24 July 2021, aged 90, surrounded by her family.

A South Boston native, Gloria (Graceffa) was involved in the BAA Boston Marathon over five decades in a variety of roles, eventually as Secretary of the B.A.A. Board of Governors.

“Gloria was the First Lady of our sport, no matter where she went,” said Guy Morse, former B.A.A. Executive Director, Boston Marathon Race Director, and a long-time colleague of hers. “Gloria cared for everyone and represented the human side of running. She strived to make the Boston Marathon a personal experience for so many and was also the moral authority that helped propel the entire organization forward.”

She began volunteering at the Boston Marathon finish line in the 1960s. It was Gloria who first instructed finish line officials to record the names and times of all finishers not just the top 100 as had been the norm. Ever since then, the marathon has kept track of all who’ve crossed the famed Boylston Street finish line.

In the 1970s Gloria stepped in to provide assistance and recognition as the women’s running movement was beginning to take shape. Her sense of loyalty to the race, running community and women runners was evident. She devised an innovative system to keep track of the women’s leaders and better showcase their talents. Stationing officials all along the course, Gloria trained each to accurately identify and record athletes as they passed by.

Long before tracking technology became the norm Gloria established a system that would uphold the integrity and authenticity of her city’s race. It soon expanded to include the wheelchair division, giving the press access to race information that helped bring their stories to life.

Gloria was elected to the B.A.A. Board of Governors in 1987. In 1993 she joined the B.A.A. as a full-time employee. She fought to ensure equal prize money – beginning in 1986 when the race shifted from amateur to professional.

“The real force of her nature was commitment to excellence,” said B.A.A. President and C.E.O. Tom Grilk. “The core value that drove her was that things should be done as well as possible.”

Recognizing Gloria’s sense of history, Guy Morse got her to serve as B.A.A. archivist and historian approaching the centennial Boston Marathon in 1996, aiming to tell the event’s history through artifacts, memorabilia and its many champions. Gloria made everyone feel like the Boston Marathon was their marathon, instilling a sense of pride and ownership of the event that brought the community even closer together.

Patriots’ Day was when Gloria shined brightest. From sunup to sundown, she was everywhere: escorting dignitaries around the start in Hopkinton; leading the Grand Marshal towards the finish in Boston; teaching politicians how to properly place the olive wreath upon a champion’s head (“If it falls off, you’re in big trouble!”); and sharing bits of race history with newly crowned winners. Everyone felt personally connected to the Boston Marathon through Gloria.

“Gloria had terrific stamina especially during race week,” said Joann Flaminio, the first female president of the B.A.A. and a close confidant of Gloria. “She was the first to arrive and last to leave. She spread the good word of the B.A.A. and the Boston Marathon everywhere she went.”

One of Gloria’s cherished passions was spreading the organization’s heritage to others. The “Gloria Tour” was a B.A.A. rite of passage for countless colleagues. Walking through the archives, Gloria shared stories dating back to the 1890s in vivid detail.

In 2021 Gloria was named by Runner’s World magazine as “The Women’s Running Trailblazer You’ve Never Heard Of”.