Breathtaking scenery at the birthplace of Aphrodite

Where the sun shines 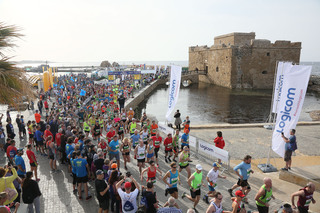 The city of Paphos lies on the southwest coast of the Mediterranean island of Cyprus where the sun shines the whole year round.

With its own international airport Paphos Region is a destination combining history, hospitality, fun, relaxation and adventure. It is a beautiful city to visit for all reasons during all seasons but especially during the Logicom Cyprus Marathon in March.

The Marathon has been held since 1999 in the ancient and historic capital of Cyprus and has grown bigger and better over the years. It hosts 3600 runners from some 65 countries. This multi-cultural event combines picturesque scenery, a pleasant Mediterranean climate along with a choice of hospitality packages in the best hotels. The organisation is among the best in the world.

The 23rd edition (deferred from March 2021) takes place on Sunday, 5 December. Four different distances are offered: Marathon, Half-Marathon, 10km and a 5km Family Fun Run. The Marathon course starts from ‘Petra tou Romiou’ – the Birthplace of Aphrodite, our goddess of love and beauty – and finishes at the Paphos Medieval Castle at the harbour.

There is breath-taking scenery from start to finish. The course follows a flat coastal route alongside the Mediterranean Sea passing traditional Cypriot villages, farmland, olive groves and orchards full of orange blossom. Coaches to the start and a baggage service are provided to all runners.

There are drink stations every 3km, toilets, First Aiders, Police in attendance and cheering spectators along most of the course. Apart from the Marathon all races start and finish at the Paphos Medieval Castle which dates back to the Byzantine period of the 13th century. This area by the fishing harbour is transformed into the atmospheric ‘event village’, with baggage collection, post-race rehydration and massages. Enjoy a free beer, music, mingle with family and friends and then watch the awards ceremony.

Those interested in local history will find the UNESCO World Heritage site by the Paphos Harbour a compelling visit. The remains of villas, palaces, theatres, fortresses and tombs make the site of exceptional architectural and historic value. The mosaics on display record Paphos in Hellenistic and Roman times (312BC to 330AD).

Trophies are awarded to the first three overall in each race and for the top three men and women in each of the 10 age group categories for the Marathon, Half-Marathon and 10km. All participants receive their official technical t-shirt, race number with electronic timing chip and other goodies. Marathon finishers receive a unique and race-specific medal to commemorate their achievement.

The Logicom Cyprus Marathon features a number of parallel events; the Marathon Expo on 3-4 December and the Cyprus 5km Wine Run through beautiful Kathikas village on Tuesday 7 December.

The race is dedicated to the Marathon Legend Stelios Kyriakides, the Cypriot who won the 1946 Boston Marathon in order to help seven million hungry Greeks. The official charity is the ‘Karaiskakio Foundation’, dedicated to organising a volunteer Bone Marrow Register.