Marathons of the Games of the XXXII Olympiad 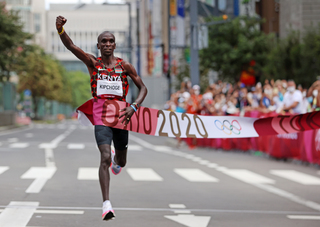 Long after Tokyo won the right to stage the 2020 Olympic Games attention belatedly focused on its suitability as venue for staging endurance events – in particular the Marathons and the Walks. The scenes of distress that had followed the finish of the 2019 World Championships Marathon in Doha, particularly of the women’s race, led to a reconsideration.

Tokyo was likely to present equally difficult conditions of heat and humidity as Doha but Sapporo, 800km further north, looked like a more distance runner-friendly location. Meteorological statistics suggested that Sapporo could be six degrees cooler than Tokyo at the beginning of August so the Marathons and walks were separated from the rest of the athletics events and passed over to Sapporo against the protestations of the Governor of Tokyo.

In the end conditions in Sapporo, although probably less severe than they would have been in Tokyo, were not as benign as predicted. It was hot (over 30C) and humid for both men’s and women’s races, held on consecutive days. To a large extent this shaped the nature of the competition: big lead groups held together far into the race because of the slow pace at which the first half of each race was run.

Peres Jepchirchir won the Women’s Olympic Marathon for Kenya in hot and humid conditions as temperatures rose above 30C in the final stages of the race. She beat her compatriot, race favourite and world record holder Brigid Kosgei, by pushing on ahead of her rival just after 40km and opening up a gap which grew to 80m by the finish line. Molly Seidel, an unheralded American running only her third Marathon, came in third a further 50m behind.

The day before the women’s race officials saw that temperatures after 09.00 were projected to rise to over 31C. With remarkable speed a decision was made to pull back the start time from 07.00 to 06.00 and communicated to the runners before they slept.

88 competitors lined up at the start with the temperature already at 25C – and set to rise to 30C by the finish. It was a cautious start as the race favourites clustered at the front and passed through the first 5km in 18.02. The processional pace was maintained through 10km as a huge group of 47 tightly-packed runners passed through in 36:16 (18:14 5km split). The race continued sedately, with 5km splits of 17:31 and 17:40, to reach halfway in 1:15:14. Up to this point the pace had been set by the race favourites which, as well as World Half Marathon Champion Jepchirchir and Kosgei, included world record holder for the half marathon Ruth Chepngetich and Lonah Salpeter, running for Israel, who had recorded the second-fastest time of 2020 behind Jepchirchir.

Seidel had remained in the pack and not yet made her presence felt but as she explained in a post-race interview: “We didn’t go out super-fast and I kept it very controlled at the beginning. After halfway, rather than follow, I wanted to make moves and be aggressive.". Despite the slowish pace the lead group had been reduced to 11 with Seidel now prominent among them, leading through 25km in 1:28:51 (5km split of 17.24). By 30km, reached with a 5km split of 17:13, Jepchirchir had taken up the pace and led eight others – but not including Chepngetich who now trailed by five seconds and was soon to drop out.

Seidel continued to push and by 35km, after the fastest 5km split of the race (16:54), only Salpeter and Eunice Chumba, running for Bahrain, were still with the eventual medallists. They tailed off before 40km, and Seidel herself now lagged the Kenyan pair by six seconds, after a 5km split of 17:01.

Neither of the two Kenyans looked comfortable in the closing stages and Jepchirchir confirmed after the race that “It was so hot; it was not easy.” Even so, it was she who managed to open up a gap on Kosgei and propel herself to the finish line with the realisation: “wow, I’m going to make it, I’m going to win”.

Despite the steadily rising temperatures throughout the race the slow start helped the first eight finishers to record a faster second half, with Jepchirchir’s being almost three minutes faster

Eliud Kipchoge retained the Olympic Marathon title he first won five years ago in Rio de Janeiro and became only the third person to do so, following Abebe Bikila (1960, 1964) and Waldemar Cierpinski (1976, 1980). But he made it look simple, with an injection of pace between 30-40km that left the rest of the field scattered in his wake.

Conditions appeared slightly less unfavourable than for the women on the previous morning but the early pace was just as cautious and the eventual retirement rate, at 30 of the 106 starters, was higher.

Opening 5km sections were timed at 15:17 and 15:36 as around 50 runners formed a loose-knit pack with no clear leader to dictate the pace. Kipchoge occasionally did a stint at the front but shared the lead with several others who just seemed to want the experience – either of leading an Olympic Marathon or, perhaps, of running alongside Kipchoge. Fist bumps were seen to be exchanged.

He did so at 31km with a sudden change of pace that put distance between himself and everyone else. His teammate Lawrence Cherono led the scramble to keep up which resulted in him heading the group of four that were rapidly losing distance on the leader. Kipchoge forged ahead, now in his own private race to the line. His split from 30-35km was 14:28, which put him 27 seconds ahead of the chasing group comprising Cherono, Ayad Lamdassem from Spain, Bashir Abdi (BEL) and Abdi Nageeye (NED).

This group lost a lot more ground to Kipchoge in the 35-40km segment but this was incidental as their attention was focussed on which two of the four would make it onto the podium. Lamdassem dropped back while Cherono drove for the line but it was Nageeye who proved strongest in the long finishing straight as he cajoled his training partner Abdi to follow him as they kicked past Cherono in the final 100m.

But the day belonged to Kipchoge who, 80 seconds clear of Nageeye, won by the widest margin since Frank Shorter’s 1972 victory.