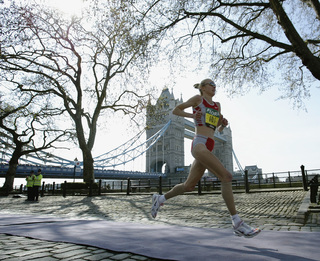 LONDON - APRIL 13: Paula Radcliffe of England runs along the cobbles past the Tower of London during the 2003 Flora London Marathon on April 13, 2003 at the Mall in London, England. (Photo by Michael Steele/Getty Images)
Photo: Michael Steele
© 2003 Getty Images

In the 2003 London Marathon Paula Radcliffe reached her pinnacle of performance in breaking the world record for the women’s Marathon by such a margin that it remained unbeaten for 16 years. But it was the previous year’s race which had set her on the path to Marathon greatness.

Radcliffe had been a presence in international competition for almost a decade, after winning the Junior (under-20) category at the 1993 World Cross Country Championships. On a snowbound course in Boston she defeated Wang Junxia, who became 10,000m world record holder later that year, and Gete Wami – the Ethiopian runner whose fast finishes were to thwart Radcliffe in many top-flight contests on both track and country in the coming years.

In her first senior cross-country race, at the start of 1993, Radcliffe finished second to Olympic 10000m champion Derartu Tulu. She found that her first experience against Tulu played out repeatedly as she would contest the race strongly, often front-running, whether over country or on the track – but was usually frustrated by faster-finishing runners who would take top honours with a quick sprint finish.

The usual pattern of runners’ career progression at the time was ‘going up the distances’ from the middle to the longer track races and cross country to road races before tackling the Marathon. Before women had been officially permitted to run longer distances this had been a progression that the men had followed over the decades: Emil Zatopek, Ron Hill, Carlos Lopes and Steve Jones had all taken this journey.

The same trajectory was followed by Grete Waitz in the build-up towards the marathon becoming accepted as an Olympic distance for women. Even before this happened Waitz had tested herself in the 1978 New York City Marathon. as a deliberate experiment in extending her athletic career. It worked, and she lowered the ‘world best time’ with her annual outings in New York from 2:32 to 2:27 to 2:25 before winning the 1983 World Championship Marathon in 1983.

Radclliffe wasn’t anywhere near the end of her career in the late 1990s but did face something of an impasse in competition as she finished 2nd, 2nd and 3rd in the World Cross Country between the years 1997–1999. In 2000 she decided to run the World Half Marathon Championships and promptly took her first world title. She retained it the following year, finishing well clear of the opposition.

With a move to road running came a move up in distance, and Radcliffe no longer needed to worry about the last-lap kick of her former rivals, as she was routinely able to outpace them well before the finish line was reached. After achieving immediate global success at the Half Marathon it was inevitable that sooner or later she would be ready to test herself in a Marathon – and almost as inevitable that that Marathon would be London.

The 2002 London Marathon women’s race was billed as a battle between the defending champion Deratu Tulu and Radcliffe, the ‘newcomer’ to the Marathon – although the pair had been competing against each other in cross country and on the track on and off for eight years.

Soon after the start a lead group of five, headed by Radcliffe, opened up a gap but the chasing group got back together again after a couple of kilometres. It seemed as if Radcliffe was tempering her urge to push on ahead and instead content to keep company with the group.

She continued to lead alongside Tulu but in the 15th kilometre started to edge ahead and by 10 miles (16.1km) she had an eight-second advantage. Running without others around her seemed to act as a release as she steadily increased her lead to pass through halfway 50 seconds clear, in 1:11:04.

In a post-race interview Radcliffe said: “I felt as though I was running relaxed. The crowd was brilliant around the Cutty Sark and even better at Tower Bridge. By that stage [at halfway] I had a minute lead, so I thought I might as well push on.”

And push on she did, running the following three kilometres at 3:09 pace. Having abruptly disposed of the competition she was now eyeing the clock, and the World record set by Catherine Ndereba in Chicago six months before, of 2:18:47.

Radcliffe scaled back slightly, as if recalibrating her own internal clock, and settled into a fast but steady rhythm which carried her through the second half of the race in 1:07:52 – over three minutes faster than her first half.

Her time of 2:18:56 was the fastest-ever recorded in a women-only race and would retrospectively become a world record when IAAF (now World Athletics) recognised a category distinction between women-only and mixed races (which allowed women to be paced by men). By the criteria of the time Radcliffe’s performance was second to Ndereba’s record: “I wanted to set the world record,” she said, “but I’d given everything and couldn’t have gone any faster.” Not on that day perhaps, but with a more even distribution of effort it seemed highly likely that she would do so in some future race.

Six months later in Chicago, in a head-to-head with Ndereba, the two shadowed each other for much of the race, half hidden by surrounding male runners, before Radcliffe forced the pace in the latter stages to win by over two minutes and improve Ndereba’s world record time by 89 seconds to 2:17:18.

She didn’t stop there. 364 days after her debut marathon she competed again in London, this time full-on from the start: “[In] the first mile nobody seemed to want to go with us and we weren’t running that fast so I just relaxed and followed the two guys.” (these were male pacemakers who had been inserted into the race to help squeeze out the fastest possible time from Radcliffe). She ran under five minutes for the third (albeit downhill) mile and was away on her own, increasing her advantage relentlessly. By Tower Bridge (20km) she was ahead by a minute, and those immediately behind her were over-stretching themselves as Radcliffe’s most serious rival, Ndereba, was even further adrift.

“I was just trying to stay relaxed until halfway and then just keep it going,” she said “but it was really, really tough for the last five miles (8km)”. Despite the effort required – or perhaps because of it – Radcliffe in fact increased her pace slightly. Her time of 2:15:25 won her the race by a margin of four minutes and broke her own world record by just under two minutes.

It was a bravado performance – but presaged by her ground-breaking run of the year before, one that launched her on a second phase of her running career in which she attracted worldwide and lasting renown.