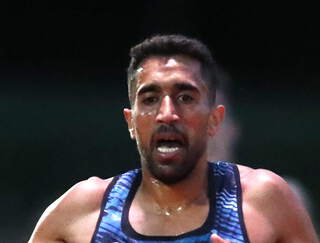 As the leaders in the men’s Olympic Marathon approached a water station at 28.3km into the course there was still a large pack holding together.

Competitors positioned themselves to grab a drink: Eliud Kipchoge was at the front and clutched a bottle cleanly. Several other medal contenders were right behind him and did likewise.

About sixth in line was Morhad Amdouni, running for France, who reached out for the first bottle in the neat row placed at the front of the table by the water station officials. Although it doesn’t appear so on a long camera shot bottles are deliberately placed so as to allow runners to target them individually. But Amdouni’s target did not seem to be one bottle as he trailed his hand along the front edge of the table and toppled bottle after bottle. He grasped only the last one in line for himself while the hand of the athlete behind him can be seen vainly grabbing for what Amdouni appeared to be intentionally denying him – and all other runners further behind. The water station officials quickly pushed other bottles forward so runners further back could reach them but those immediately behind Amdouni – and therefore likely to be his closest rivals – missed out on a chance to hydrate in the torrid conditions.

After some eagle-eyed viewers noticed this incident and launched it into the twittersphere Amdouni went to ground for the next day or two but then emerged to claim his act was not deliberate. Amdouni finished 17th in a time of 2:14:33.