It’s a tough course … but it’s the original

A race of legend 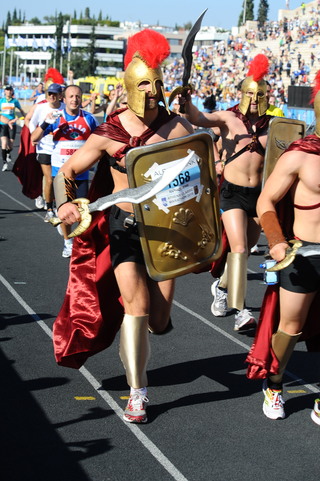 If there is just one race a Marathon runner must do once in their running life it is this one, where it all started.

No matter that the course bears no earthly semblance to what it must have been like even for the “original” marathon in 1896, never mind the legendary one 25 centuries ago. It is still the one that gave birth to the Marathon as a sporting event.
The 2500th anniversary of the Battle of Marathon (bedevilled in its definition, like the Millennium, by whether or not we count Year Zero) proved to be the occasion on which many undertook the pilgrimage. The entry opened in March and the 12000 places allocated were taken within three weeks (representing a threefold increase on the normal size of the race).

The race is point-to-point; it starts in Marathon and finishes in Athens. That means runners take buses out to the start line on race morning, knowing that they will soon have to do the return journey by foot. It reinforces the popular idea of what Marathon is – a very long way, a challenge and, once completed, an achievement.

The route is historic, so cannot be changed, and it is one of the toughest around, rising several hundred metres between 11km and 31km before dropping gently down to the finish at the Panathenikon Stadium, where the first modern Olympic Games were held in 1896.

The first challenge in this anniversary event though was to get to the start line, as a fleet of hundreds of buses disgorged their passengers near the start who had to find space to change, hand baggage over to the equally large number of trucks waiting to transport them to the finish line, and then find the correct position from which their particular “wave” start would edge into position for the off.

In fact there was a slight adjustment to the course for this landmark edition of the race, as the start line had to be pushed forward by a few dozen metres to make room for the vastly increased numbers crowding behind it. An extra turn was added in just after 5km to compensate, but the possible bunching effect this would have created was defused by the staggering of the eight starting waves.

Once under way the early kilometres were easy to negotiate, although some runners, trapped in later waves, had to battle past large numbers of slower starters. The road is half of a highway that now follows the same route that 115 years ago was no more than a dusty track. The route of legend started from somewhere near the 5km point, where the modern-day course circumnavigates the tomb of the Marathon warriors; they were buried – all 192 of them – close to where they fell on the battlefield.

A little after looping around the site of the tomb and rejoining the 1896 route, the road starts to become built-up, with shops, gas stations, restaurants and houses. Crowd support here was good, with children offering runners olive sprigs that many accepted and carried with them right through to the finish. What greater contrast could there be than with a battle-scarred soldier throwing down the sword and stumbling back to base with news of the victory?

But it was probably not like that at all – according to some research. There could have been 11000 battle-scarred warriors embarking on a far more urgent mission of circumventing a second Persian attack. This bundle of historical possibilities is what brings us – the present-day 11000 – to the task of slogging up the hill towards Athens, but with far less urgency.

On the Friday evening before the race a huge public celebration of the 2500th Anniversary of the Battle of Marathon was held outside the Zappeon Megaron, which was the athletes’ Olympic village in 1896, and which now houses the marathon expo. A film was shown featuring a reconstruction of the legendary soldier-messenger stumbling towards Athens: climbing up over grassy heights, fighting through forest undergrowth and splashing through muddy puddles. It was far from the sight we presented – clad in our multicoloured lightweight technical running strip, and running along a smooth strip of asphalt. The tough gradients have been levelled out, not just since the days of the battle but also since the first Olympic Marathon, along that dusty road.

Physically, what we were trying to do did not really bear comparison. But the beauty of the Marathon is that it transcends these comparisons. A Marathon is a Marathon – whether in 490BC or 2010, whether in Athens or in Antarctica, whether uphill or down. It gives us something in common, and 11000 people turned out in this race to testify to that effect.

And we made it up the hill. Running, struggling or walking, after cresting the peak at 31km the gentle downhill gradient gave us all impetus, even though we were fading. It was only with 3km to go that the certainty of finishing allowed the sense of celebration to start taking effect. The final kilometre, downhill beside the park with crowds gathering and becoming noisy in their encouragement, was one of the most memorable that anyone could ever run.

Entering the grand marble stadium, we had 100m to run. We savoured every step, imagining ourselves being escorted by royalty like the original Olympic winner Spiridon Louis – but never with any doubt that we would live to tell the tale.

Running this race was a privileged experience, but those who did not make it to the Marathon start line this year have another chance: factor in Year Zero and the 2500th anniversary falls in 2011. Book your place in the race on 13 November 2011 when the race entry opens on 1 March – or wait another few centuries.