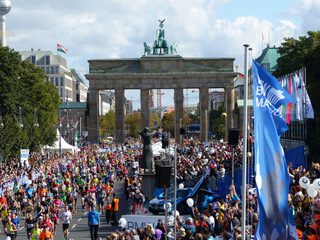 Frankfurt and Cologne had to pass, but Berlin, Munich, Hamburg and Münster are currently still in the running.

The imponderables regarding the corona pandemic and possible higher case numbers are the reason why the organisers in Cologne and Frankfurt have now cancelled their races.

It is now the time when the organisers of the autumn races must decide whether to host and order all appropriate materials and services. This harbours the risk that in the event of subsequent, short-term cancellations due to the high number of corona cases, you will be left with the costs and in the worst case – if no existing insurance takes over – you will have to file for bankruptcy. In this respect, the cancellations are understandable at the present time. And it is to be expected that other major German races will also be taken off this year’s calendar.

The question is to what extent the incidence value will still be the decisive factor for possible restrictions in a few weeks’ time. Possibly, as in Great Britain for example, the hospital and death numbers are more decisive. According to the current status, these seem to be significantly lower than before with the currently prevailing delta variant and due to the progressive vaccinations. But the organisers need a level of reliability – and this is not there at the moment. The situation is very different from city to city. This apparently also applies to the question of spectators along the course.

Some organisers expect that many runners will not want to start in a mass race for fear of infection. According to several organisers, at least 10,000 participants are required for a large city marathon to pay off economically.

At a 10 km race in Berlin (city night on Kurfürstendamm) on 31 July the fear of a mass race was not confirmed. Of around 4500 registered runners, a good 4000 made it to the finish line. In addition, there were a few hundred that ran over 5km without timing. It was the biggest run in Germany since the beginning of the corona pandemic. And the dropout rate was very low, i.e. in the normal range.

Frankfurt: The Mainova Frankfurt Marathon was supposed to take place on 31 October but has been cancelled 3 months beforehand. “In the current situation the event cannot be projected, because no one knows what the legal situation will be on the day of the event. We need a clear planning basis now at the latest, less than three months before the race weekend. A major event with as many facets as our Mainova Frankfurt Marathon cannot be implemented in just a few weeks. Despite an extensive hygiene and safety concept and a preliminary official approval, there is no guarantee that the event will not have to be cancelled at short notice, which would endanger the continued existence of the Mainova Frankfurt Marathon.

Cologne: The Cologne Marathon planned for 3 October was cancelled at the beginning of August. “We hoped to the end and made all the preparations for the safe execution of the Cologne Marathon, but unfortunately current conditions do not allow around 20,000 people to walk through our city together this year,” said Markus Frisch, the race director. Although a hygiene concept was presented this only applies if the incidence remains below 35. The Cologne organisers do not expect this to be the case in October. The current value in Cologne has already reached 40.

Hamburg: On 12 September the Hamburg Marathon could be the first big race held over 42.195 km in Germany since autumn 2019. On request, the organisers have confirmed that they are still planning to start the marathon, although the Hamburg Senate has announced a restriction. As the “Hamburger Abendblatt” reported, only those who have been vaccinated are allowed to take part in a number of major sporting events in the city. The city has not given any permits for various planned runs in the last year and a half but has now set up a rule to specify under what conditions the marathon could take place. The Hamburg organisers must expect that they will have fewer participants if runners who have tested negative or who have recovered are not allowed to start. But according to the report Senator Andy Grote, who is responsible for sport, has promised the organisers help.

Munich: The Munich Marathon is planned for 10 October. Whether the race can take place will be decided within the next two weeks. “We had good discussions with the city, including those responsible for health,” said race director Gernot Weigl. “There is definitely a glimmer of hope. But the question is, what if the incidence values ​​are higher on 10 October? There will be another meeting with the city. Then we will make a decision, ”said Gernot Weigl, whose team would implement the hygiene concept developed last year. “We want to start the marathon and have also planned three spectator zones to control hotspots along the route.” However, the race director also registered another problem as a result of the pandemic, German Road Races (GRR) has already pointed out that the support with voluntary helpers by the clubs is no longer as strong as it used to be. Many older volunteers in particular are reluctant.

Münster: After a final conference with the city administration all necessary facets regarding a Corona-compliant running event were discussed. All requirements were examined intensively and their feasibility explored. The OrgaTeam from the Münster-Marathon eV sees itself in a position to implement the measures recommended by the city in an appropriate manner so that the runners can get “their” Volksbank-Münster-Marathon on 12 September.

Neither the city nor the organisers can say how the number of infections will develop by the beginning of September, so it could also be cancelled at short notice. This is especially likely if the incidence value rises above 35 for 7 consecutive days. Nonetheless, those involved also hope that the federal government will take into account not only the “pure incidence figures” but also hospitality, because the increase in incidence figures and hospital admissions is now clearly contrary to the previous year.

Berlin: People in Berlin are still optimistic that the Berlin Marathon can take place on 26 September with up to 35,000 runners starting. In consultation with the Berlin Senate the race is one of a number of pilot projects in the field of sport. In this respect, the chances are better than in other cities that the largest German marathon can take place – but there are no guarantees.

After the 10km race on 31 July another 10km run is to take place in Berlin on 8 August followed by the Generali Berlln Half Marathon, with over 20,000 runners, on 22 August.