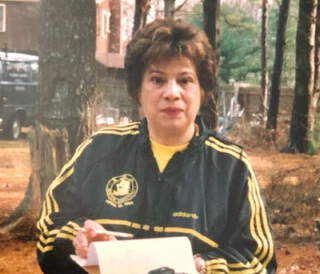 Boston Athletic Association has announced the loss of Gloria Ratti, a trailblazer, leader, and loving matriarch of the New England running community.

Gloria’s infectious positivity touched thousands – and especially the B.A.A. organization. A South Boston native, Gloria (Graceffa) was involved in the BAA Boston Marathon over five decades in a variety of roles, eventually as Secretary of the B.A.A. Board of Governors.

“Gloria was the First Lady of our sport, no matter where she went,” said Guy Morse, former B.A.A. Executive Director, Boston Marathon Race Director, and a long-time colleague of hers. “Gloria cared for everyone and represented the human side of running. She strived to make the Boston Marathon a personal experience for so many and was also the moral authority that helped propel the entire organization forward.”

“Gloria had terrific stamina especially during race week,” said Joann Flaminio, the first female president of the B.A.A. and a close confidant of Gloria. “She was the first to arrive and last to leave. She spread the good word of the B.A.A. and the Boston Marathon everywhere she went.”

Gloria passed away peacefully on 24 July 2021, aged 90, surrounded by her family.