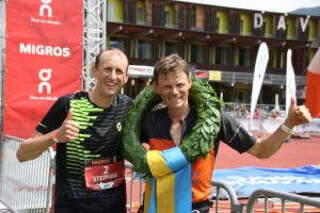 As a “late entry” into the Swissalpine classic (hence the high start number 588) the German Benedikt Hoffmann was only tipped by mountain running insiders. By contrast Stephan Wenk (SUI) and Germain Grangier (FRA), wearing the “pole position” start numbers 1 and 2, were much more favoured.

“I wanted this win,” said Hoffmann, who lives in Stockach on Lake Constance and has the Alps practically on his doorstep. And he really earned this victory, taking the lead on the ascent to the Sertig Pass and holding it for the rest of the 67.6km-long route with 2606m of climb.

Hoffmann improved the course record held by the Italian Ricardo Montani (6:12:28) by almost half an hour and finished with a six-minute lead over Wenk and another seven over Grangier. It was only the fifth German victory in the 36-year history of the Swissalpine, with the wins by Charly Doll (1988, 1989) and Frank Türk (1997, 1999) in the now distant past.

After an early exit the previous year Jasmin Nunige, who lives in Davos, returned to take her eighth win on the Swissalpine ultra distance classic. The former Olympic cross-country skier finished with 6:50:36 and was no less overwhelmed by her success than Hoffman. Her time was nine minutes faster than the 2020 winner Marcela Vasinova. After two foot operations in September and March Nunige had a late start to her Swissalpine preparations. “It was a tough way back, so this win is the greatest reward for me,” she said. Fifteen minutes later, the 48-year-old congratulated the runner-up Natascha Baer, who looks set to step into Nunige’s shoes after her K43 victory last year and debut in the 67.6km classic race this year.

Davos will have to get used to a new name in 2022. Under the direction of the new OC President Tarzisius Carviezel, the high mountain spectacle will be restyled as the “Davos X-Trails”.

“We will stick to the four races K68, K43, K23 and K10, because these are extremely popular with the runners,” said Carviezel. “But there is a lot to optimise – and we will create a character for the event in the future that has become lost a little over the years.”